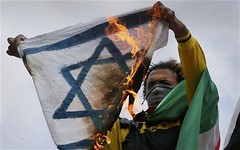 Over the past two days my sympathies with regard to Israel and Palestine, which were initially with the Gazans, have started moving back in a pro-Israel direction. I keep asking myself what my country would do in similar circumstances. I hate what’s happening, but I can’t bring myself to condemn Israel.

Moreover, some European pro-Palestine protests have begun to take on an anti-Semitic tone. That ugliness is always somewhere close to the surface, and it’s beginning to bubble up through the cracks in places.

So much spin! I don’t doubt that 90% of what we read and see here in the States is meant to make us hate one side or the other. But not all of it is spin. There is a historical truth that is not at all difficult to discern. There is one side in this conflict that would cheerfully commit genocide against the other. That side is not Israel.

I have to go with my gut. My gut says Israel is doing what it must. I know this is an unfashionable position, but I’m standing by it.

Dear ________, if you monitor Israel/Gaza chatter on Facebook or Twitter, you’ll see why I said taking Israel’s side is unfashionable. I meant to chide those who call Israel an apartheid regime; after writing my post I posted links to it on Facebook and Twitter, hoping some of them will see and read it. I was initially sympathetic to the Gazan civilians, as any warm-hearted human would be. I still am. But as always happens with a new Israel/Palestine conflict, my thoughts quickly came back to what the Palestinians would do if they had the weapons, organization, and discipline of the Israelis, and I was soon re-grounded.The Muslim/Arab nations’ end goal is the elimination of Jews. They’ve said it so emphatically and often, one has to take them at their word. I think the chattering classes on Facebook and Twitter will eventually realize their warm-heartedness is leading them to embrace a genocidal cause, but it’s going to take a while, particularly if there’s a cease-fire and Israel goes right back to building settlements.One last thing: I have Jewish friends but no Arab-American or Muslim friends. Honesty requires me to say so, and to acknowledge my friends’ influence on my opinions.