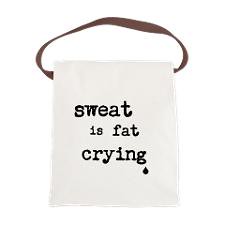 Sure, making fat cry is a laudable thing, but no one wants your sweaty fat teardrops on the equipment at the gym, and that’s why they have those handy wipe dispensers on the walls.

Some guy wasn’t wiping down the machines after sweating on them at Anytime Fitness this morning, and it fell to me to be the gym Nazi and point out to him that his behavior was inconsiderate and anti-social. He looked at me like I had three heads, walked out the door, got in his car, and drove away … without going back to wipe down the leg extension machine he’d just slathered with disgusting liquid fat residue.

From now on I’m keeping my iPhone on my person so I can take photos of people who do this and email them to the owner of the gym, a friend and former F-15 pilot. I’m going to suggest he put up a bulletin board of sweathog shame and pin violators’ mug shots to it.

Some folks are just assholes. At least I’ve discovered who it is that sets all the wall-mounted TVs to Fox News. Has to be him, am I right? Of course I am, and you know it.

Speaking of disgusting, look at this sweaty mess a neighbor of mine left in my Gmail inbox last night. I don’t get a lot of anti-Obama chain mail and it’s the first time I’ve seen this particular example, but apparently it’s been making the rounds for years. I took out some odd, apparently purposeless indentations, but left line breaks, capitalization, and errors intact. I love how the author hints that his letter is not about Obama but only about Christianity … before diving head first into the anti-Obama cesspool. Ready? Here we go!

I know there are some of you that are Democrats, and love Obama, but this is for Christians first, politics later. I do pray that it doesn’t offend anybody with the truth of the message, but it has to be sent. If you love your Lord first and your politics later, then you will appreciate this message and you just might appreciate it anyway. If you don’t, I’m sorry I judged you incorrectly.

When we get 100,000,000, that’s one hundred million willing Christians (or like minded people) to BOND together, voice their concerns and vote, we can take back America with God’s help, Become one of the One hundred million. Then let’s get 200 million. It can be done by sending this email to your friends. Do the math. It only takes a willing heart and a fed up soul. God Bless America and Shine your light on Her..

In 1952
President Truman
Established one day a year as a
“National Day of Prayer.”

In 1988
President Reagan
Designated the
First Thursday in May of each year as
The National Day of Prayer.

In June 2007
(then) Presidential Candidate Barack Obama
Declared that the USA
“Was no longer a
Christian nation.”

HE PRAYS WITH THE MUSLIMS!
I guess it Doesn’t matter
If “Christians”
Are offended by this event –
We obviously
Don’t count as
“anyone” Anymore.

The direction this country is headed
Should strike fear in the heart of every Christian,
Especially knowing that the Muslim religion
believes that if Christians cannot be Converted,
they should be annihilated.

Send this to ten people
And the person who
Sent it to you!…
To let them know that
Indeed, it was sent
Out to many more.

The first two items, about the origins of the National Day of Prayer, are factual. Everything else is false.

Obama never said the USA was no longer a Christian nation. What he said was this: “Given the increasing diversity of America’s population, the dangers of sectarianism have never been greater. Whatever we once were, we are no longer just a Christian nation; we are also a Jewish nation, a Muslim nation, a Buddhist nation, a Hindu nation, and a nation of nonbelievers.” Now you may hate it that he included nonbelievers and Muslims, or maybe you think Hitler was right and we should round up the Jews, but what Obama said was factual, correct, and totally in line with America’s vision of itself as a religiously tolerant nation.

There was no “National Day of Prayer for the Muslim Religion” on September 25, 2009. There was an event that day called “Islam on Capitol Hill.” It was organized by a prominent Muslim-American attorney and was meant to bring other Muslim-Americans to the national capitol to pray for America and express support for the nation, to show that they are patriotic Americans too. In fact tens of thousands of Muslim-Americans did show up in Washington DC that day to pray for America. The event was not sanctioned in any way by the White House (as implied in the chain letter), and President Obama did not attend.

President Obama does not pray with the Muslims. Apparently this one has its roots in a photo of Obama removing his shoes before entering the Blue Mosque in Istanbul during a state visit. It’s what you do before entering a mosque, and when you’re paying a state visit to a Muslim nation, you’re going to enter a famous mosque or two.

If you follow my links, you’ll see I checked the chain letter’s anti-Obama assertions with both “liberal” and “conservative” fact-checking entities: factcheck.org, politifact.com, snopes.com, and urban legends.about.com. The nutters got tired of having snopes.com waved in their faces whenever they tried to revise history or make up their own facts, so years ago they launched a chain mail campaign to neutralize snopes.com by labeling it a liberal propaganda site (need I even say the assertions in that chain mail are also false?). Today, if you answer conservatives’ arguments by quoting snopes.com, they’ll wink knowingly at one another and say “Sure, buddy.”

Oh, I know I’m wasting my time. When it comes to chain mail, one enters a fact-free twilight zone. In that twilight zone, a Kenyan child was groomed and trained from birth to run as a Manchurian candidate and win the American presidency, at which point he was to turn the country over to the Islamic Caliphate (which explains why there’s a mosque sitting where the Twin Towers used to be). Patriotic Christians have been herded into FEMA camps (so that’s where your neighbors went). Boys and girls are forced to pee next to each other in unisex restrooms (no wonder Johnny’s turning out gay). The Pledge of Allegiance and national anthem have been outlawed (it is known).

Short of simply not wanting to have a black president, I don’t know why anyone would want to live in that twilight zone, but there it is, and it has plenty of willing inhabitants.

And one of them left a sweaty, fatty, smelly mess in my Gmail inbox. It’s gonna take a fistful of wipes to clean it out.