I always feel bad when I don’t finish a book, especially when it’s kind of an assignment, as in the book club selection I gave up on last week. Book club selections are by majority rule; sometimes I’m in the minority and the book is one I wouldn’t have read on my own. Other members don’t seem to have a problem not reading books they’re not interested in (we haven’t had a meeting yet where every single one of us finished that month’s selection), but when it’s me I feel I’m letting the team down.

I’m good for July’s meeting. We decided to read a hard-boiled detective novel, so we picked Dennis Lehane’s Darkness, Take My Hand. I didn’t think it was all that hard-boiled, but I did read it and am ready to talk about it this Saturday. It’s the August book I gave up on, Cubed: A Secret History of the Workplace, by Nikil Saval. Saval really gets into his subject: the evolution of office work from the days of Bartleby the Scrivener to today; how poorly paid clerks became well paid white collar workers; how the introduction of women into the office changed business and society. He writes about it in a witty, breezy way, and you could very well read it as a companion piece to a marathon Mad Men rerun watching session. It’s a good book … and I think if Saval had written about almost any other subject I would have enjoyed it cover to cover. 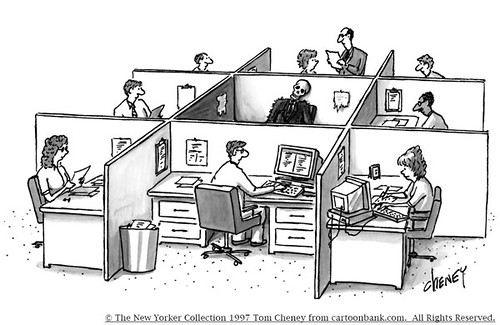 After I retired from the Air Force I went to work as a contract instructor, training fighter and reconnaissance pilots at bases in the US and overseas. Yeah, more white collar than anything else, but during those eight years I was basically a free agent. I built my lesson plans at home, occasionally dropped by the home office in Memphis to coordinate with my bosses and the other instructors, but mostly traveled and taught. Then I wound up managing a team of educational developers and graphic artists, responsible for producing lesson plans and study materials for A-10 pilot training at Davis-Monthan AFB. I was finally stuck in an office — where I quickly grew to hate the white collar life. By the time I quit that job, four years later, I never wanted to see the inside of an office again. I went to work as a school bus driver, then as a handicapped van driver for the VA hospital in Tuscon, blue collar all the way. And though the driving jobs paid only a fraction of what I’d earned before, I enjoyed the work. I knew I was doing something of value, something fundamentally more important than anything I did in the four years I worked in that office. When I finally retired for good, I think it’s telling that I decided to volunteer as an air museum docent, a job that keeps me on my feet, leading walking tours and talking to museum visitors, almost the very opposite of an office routine.

When I started reading Saval’s book, everything bad about my four years in a cubicle came rushing back: the politics, the meaningless meetings, the make-work, the politics, the back-biting, the politics … and I just couldn’t read another damn page. I lived it; no amount of humor or good writing will ever make me want to revisit it.

If you can do it, kids, train for a profession where you’ll use both your body and your brain.