Donna saw me putting on my air museum shirt and pants yesterday and wished me a good morning at the zoo. Thus it begins, the slide toward senile dementia. It’s not Donna I’m worried about, it’s me: after dozing off while reviewing my museum notes I woke up to discover I was on Wikipedia, boning up on giraffes.

Since wrecking my knee in September I’ve had to cut back on air museum tours. I continued doing my regular Wednesday tours at first but after the 10:30 tour I’d struggle to get through the 11:30, and for two days afterward I’d be virtually immobile at home: useless, pathetic, gross. Since then I’ve learned both knees are shot and that I’ll need two separate operations. The orthopedic surgeon gave me a cortisone shot in early November. I kept myself on the schedule for yesterday’s tours mainly to see if the cortisone would make it any easier. The answer is sort of but not really. There was less pain, and I was able to get through two hour-long tours without lurching around like Forrest Gump, but today I’m as stiff and sore (and useless) as ever. I should have a date for the first knee soon, and as soon as I can walk on that leg again I’ll schedule the other knee. I hate not being able to pull my weight at the museum … never mind not being able to walk and hike, or ride my bicycle any distance.

I’ve been trying to pass on to Polly a lifetime’s experience riding motorcycles, warning her about the oblivitrons who’ll look you in the eye, run you down, and then say they didn’t see you; the drivers who’ll pass you, pull to the side of the road as if they’re stopping, then suddenly and without signaling pull a U-turn; how to get through curves by looking to where you’ll come out of them, not down at the pavement immediately before you; watching what’s happening ten cars ahead in traffic … you know, basic survival skills.

Yesterday while riding the Goldwing home from the air museum I found myself behind a pickup truck carrying a dining room set in the bed. Suddenly chairs were tumbling over the tailgate and into my path. I’m so glad I wasn’t following closely … had I been I wouldn’t have been able to avoid them. Chairs, it transpires, are related to footballs (who knew?): not only do they bounce in unpredictable directions, they continue bouncing unpredictably long after you think they should have stopped and come to rest. Whew.

Telling Polly about it last night I remembered a couple of times when I’d followed cars too closely and paid the price for doing so. The first time the car ahead of me kicked up a hubcap that had been laying in the road. I had the presence of mind to hit it straight on and not try to swerve out of its way, but it got caught between my front tire and fender and ripped off a section of fender. The second time it was a six-inch length of four by four lumber. That one could easily have taken me down (and it would have been ugly since traffic was moving around 50 mph at the time) but once again I hit it straight on and merely got a jolt. Later, though, I discovered a big crack in the lower engine cowling, and it cost somewhere north of $150 to replace it. I always stay well behind large trucks until it’s time to pass, and then pass as quickly as possible; a thrown truck tire tread could easily cut a motorcyclist in half … but I’d been a little more careless about cars until those two experiences. Now I give everyone a wide berth, even bicyclists … you never know when they’re going to hit a rock and fall down. Oh, Polly, do always be careful, you hear?

I checked the saved programs on my DVR last night and saw some Jon Stewart and Stephen Colbert shows in the queue. Not that many, really, since between the two of them they take more vacations than anyone in the business, but still. Normally I tape their shows and watch them the next day, but since the election I’ve lost interest. The relentless “fiscal cliff” scaremongering is bringing me down. NPR, NBC, CBS, and ABC are all in synch: austerity’s the word, and while we’re at it we’d like to take your pensions, Social Security, and Medicare as well, thank you very much. It’s all bullshit, cover for a massive upward transfer of resources and wealth, but not one media outlet will allow it to be said and I’m beginning to think that when Stewart and Colbert poke gentle fun at the congressmen and financiers who want to immiserate us they’re in fact doing more to enable the end of the middle class than to combat it. I’m beginning to think, in other words, that Stewart and Colbert are part of the media village propaganda machine. And suddenly they seem less funny.

World-weary chuckles and ironic sneers aren’t going to stop the bastards. I want me some goddamn action. How about you?

Speaking of funny, two nights ago Polly took me, as a delayed birthday present, to see David Sedaris at the U of A’s Centennial Hall. It was great to go out to an old-fashioned Chautauqua-style event with a crowd of intelligent people. Sedaris always signs books after his presentations and Polly stood in a long line to get hers signed, but I was happy to wait for her. It was a great evening. Still, now that I think back on it, nearly every story or joke David Sedaris told was scabrous: we learned about his colonoscopy and his encounters with men and women who shit into their hands in public restrooms to avoid making an audible splash, and he passed on two utterly horrid blow job jokes. I wonder what Mark Twain would make of today’s lecture circuit humorists.

Here’s my little desk buddy Schatzi, the best co-blogger anyone could have: 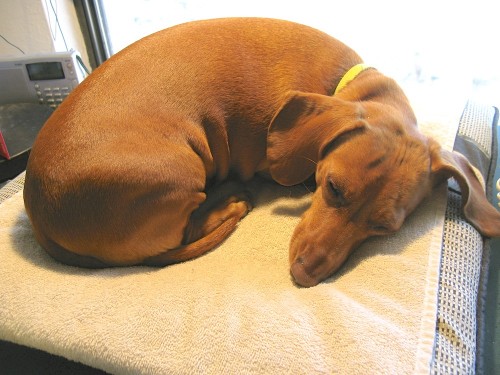