Our view this morning, looking north toward the Santa Catalinas: 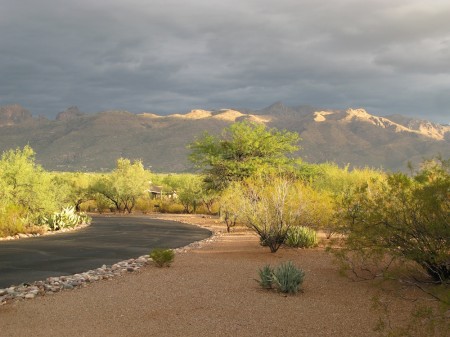 Isn’t that lovely? Two hours later, as I write this, the clouds have thickened. They say it might snow down to 6,000 feet this weekend and even dip below freezing down at our level. Time to find some old towels and wrap the outdoor water pipes.

Mixed sunlight and cloud. Sort of sums up my reaction to the election. I’m feeling sunny in that the moderate centrist won and the extreme right-winger lost. Sunny in that most Americans didn’t swallow the Romney campaign’s lies. Cloudy in that I wish Obama were truly a progressive and not such a friend of Wall Street. Cloudy in that he acts like he’s willing to sign away some Social Security and Medicare benefits in pursuit of a grand bargain with the Republicans.

The day after the election I read that our congressional race, Arizona District 2 (Gabby Gifford’s seat, as it probably will forever be known) had gone to the GOP challenger, Martha McSally. I know Martha from her days as an A-10 pilot at Davis-Monthan AFB. She’s a vet and a former fighter pilot. What’s not to like? Well, her politics, for one thing … she’s a conservative Republican, and she believes in their brand of voodoo economics (you know, cut taxes for the wealthy and they’ll give jobs to all the peons). I suspect she buys into the basic kit of GOP racism, sexism, and authoritarianism too. But the thing is I really don’t like her Democratic challenger, Ron Barber. Sure, he’s a Democrat, but he’s a blue dog, pretty much a Republican himself. And I heard him on the radio, days after the last mass shooting, literally saying “now is not the time to politicize this tragedy.” What a tool. Logically, Barber’s probably better on immigration than McSally, but I just don’t like him. Now, a few days later, it turns out the race is not settled: there are still thousands of early ballots to be counted, ours among them (and we did vote for Barber, albeit while pinching our noses).

But probably no one outside this congressional district cares about that, so enough.

Is it time to take the Obama/Biden sticker off the back of my car? I guess. If I leave it on now people will think I’m gloating, and there’s too much of that as it is. Someone on Facebook said she thought a tractor-trailer driver who tailgated her on the freeway last week was angered by her Obama sticker. I think she’s wrong about that. Had she said it happened after the election I might believe her, based on some of the unhinged right-wing reactions we’re all seeing on Facebook and Twitter. But I’ve been driving around with my Obama sticker for months now and haven’t experienced any problems. What gets people upset is my little running fish appliqué, the one holding a mug full of beer. A guy actually got out of his car at a stoplight once and rapped on my window. I rolled it down and he asked me if my fish was holding a beer. When I said yes he scowled at me and walked back to his car, shaking his head. I guess some Christians think they own the fish!

I am aware that there are people who like to tell complete strangers about their colons and digestive processes. I am not one of them, so don’t worry, I won’t share the details. Suffice it to say that during my recent physical the doctor saw something he didn’t like and sent me for a colonoscopy. Which I had yesterday.

I had some fears beforehand. What if what the doctor saw really did turn out to be something? Oh, no, it must be cancer! The closer I got to colonoscopy day, the more I worried. And fears aside, the whole thing is just so … undignified! I’m sharing this with you because I think some of you are getting to the age where you, too, will be having colonoscopies, and I suspect you have the same fears. Otherwise I wouldn’t gross you out by talking about this stuff.

So I’ll cut to the chase. The nurses, aesthetician, and doctor could not have been more professional. The procedure was painless. The results were clean. I don’t have to do it again until I’m 76. I joked afterward about trying to find the person in charge of giving me back my dignity, but in fact I couldn’t have been happier with the care I received (or more relieved to find out there’s nothing wrong with my innards). If you’re dreading the experience, well, I hope what I just shared helps ease your mind.