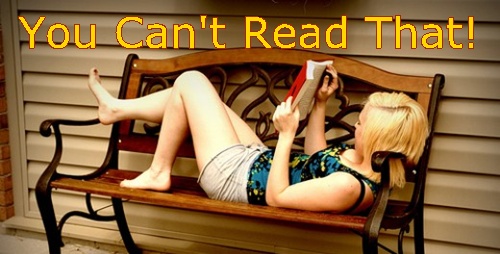 Frequently-challenged children’s book And Tango Makes Three is under fire again, this time in a Minnesota school district.  God, you’d think it was about homosexual penguins or something!

The Republic, Missouri school district superintendent who tried last year to ban Kurt Vonnegut’s Slaughterhouse-Five because it was “not Christian” has resigned.

Internet blocking filters used by schools “… are a new version of book-banning or pulling books off the shelf,” according to the American Library Association. “The difference is, this is much more subtle and harder to identify.”  Why?  Because local school districts are not the ones making decisions on what to block … filter designers are anonymous and unaccountable.

Did you ever read Orson Scott Card’s science fiction novel Ender’s Game?  Did you think it was pornographic?  One parent in Aiken, South Carolina did, and now the teacher who read a passage from it to his class has been suspended pending an investigation.

Barbara Ehrenreich’s Nickel and Dimed “promotes socialist ideas and drug use while belittling Christians,” according to a Nazareth, Pennsylvania parent who wants it taken off a high school reading list.  But here’s some good news for a change: the school board reviewed the book and decided it’s a keeper. As I said when I reviewed the book in an earlier post, “high school kids (ye gods, especially high school kids) need to read it.”

Another group of Pennsylvania parents is challenging Jeannette Wallis’ memoir, The Glass Castle, saying it is too graphic for 10th graders.  I wonder, have these parents ever listened to what their 10th graders actually talk about? 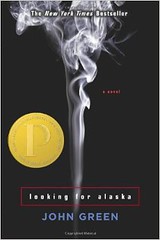 Looking for Alaska
by John Green

From a previous You Can’t Read That! column:

Looking for Alaska is a coming-of-age story, one of the best YA novels I’ve read in a long time. Published in 2005, it won multiple awards for fiction and youth fiction, including the Los Angeles Times Book Prize and the Printz Award. It’s on advanced placement English reading lists in high schools all over the country, and is exactly the kind of book intelligent teenagers want to read. Not only that, it’s the kind of book intelligent teenagers will recommend to their friends. It’s about them, after all. It captures perfectly the intensity of their inner lives, their allegiance to friends, their curiosity about the world, their first adventures into adult pleasures and vices … including, of course, sex.

The story is narrated by Miles, aka Pudge, a loner who transfers to a private Alabama boarding school. For the first time in his life he finds himself among like-minded kids, bonding with a small group of male and female students who share his love of reading and curiosity about life … and he begins to share in their more adventuresome activities, including smoking, drinking, sneaking out at night, and pulling memorable pranks.

John Green gave Looking for Alaska an interesting structure. The climax of the book — the kids’ devastating introduction to the starkest adult experience of all, the death of a beloved friend — happens in the middle. Miles’ narrative, which reads like a diary, counts down to the climax with chapter titles like “One Hundred Days Before,” then climbs up from there with chapters like “Fifty Days After.”

Looking for Alaska is beautifully written. Even as a 65-year-old reader I felt the tug of wonder and anticipation I once felt as a teenager … and I too fell in love with Alaska. That’s good writing.

So what’s the deal with parents wanting this book banned? Referring back to the newspaper article I linked to above, that particular school district notifies parents ahead of time what books students will read in advanced placement English classes. Books with mature themes are supposed to be asterisked so that parents can notify teachers if they want their children to read other books instead. In this case, Looking for Alaska was not asterisked, and parents did not know ahead of time their kids would be reading a book that mentions blow jobs.

Okay, I can see that. I read the book, and there is indeed a short passage about a blow job. If I had a 12- or 13-year-old, I’d probably squirm if I knew he or she was reading this book. Older kids, though, like the high school students in question? No problem, at least with me. There’s nothing erotic or pornographic about that brief passage, and oh by the way do you remember what your and your friends obsessed about back in high school? I’m willing to bet cigarettes, booze, and sex — especially sex — were as high on your list as they were on mine.

But it’s not just one school district, or one group of outraged parents. Looking for Alaska has been challenged again and again, all around the country, whether or not parents had the option to choose other books. Conservative book-banning sites like SafeLibraries.org do their best to whip up religious groups and concerned parents, misleadingly conflating the mere mention of sex with pornography, then taking the lie one step further by claiming that pornography is being forced upon innocent 12-year-olds by subversive teachers.

I’m going to insert here a long quote from a reader review of Looking for Alaska, written by a school librarian with direct experience of one of the many attempts to ban the book.

The media specialist that I worked with purchased this book for the middle school library. The library lady (at-the-time) was fanning through the book, when the words “blow-job” jumped off the page and slapped her in the face! From there it just spiraled out-of-control and the book was scanned for every “f” word and sexual act that could be found. Needless to say a big book cleaning (banning) took place and a group of closed-minded people were able to remove 60 books from the library. All of these left the shelf without going through any proper consideration. I have the list of books. I’ve been reading them a few at a time. I’ve been slowly adding some of them back to the library, but this time they are flagged in the system. A permission slip with information about the book is printed out and signed before a student can check out any “objectionable” book. I have no respect for the media specialist, (he no longer works for the school…yippee). He never fought for any of the books but even more important, he had no idea what he was ordering. I would NOT put this book in the middle school, but it did not stop me from allowing my 13 year-old son to read this before me.

Finally, to address the charge of “pornography,” let’s hear from John Green himself: