“Teachers won’t be able to model those skills if our schools and courts continue to muzzle them. But the same democratic imperative also demands that teachers responsibly restrict what they say, just as other professionals do.”

That’s from a New York Times op-ed by Jonathan Zimmerman.  Does it sound like he’s saying teachers need to censor themselves in order not to be censored?  Sure sounds like it to me.  I say it’s spinach, and I say to hell with it. 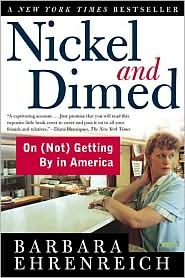 Nickel and Dimed: On (Not) Getting By in America, by Barbara Ehrenreich

This book was recently challenged by parents in Bedford, New Hampshire, who wanted it taken off a high school finance class reading list. The parents’ stated objection was to a sentence describing Jesus Christ as a wine-guzzling socialist vagrant, but I suspect their real objection was to the book’s political message … certainly that was the case with the many right-wing bloggers who took up the parents’ cause and cheered when the school board buckled and removed the book from the reading list. I decided to read Nickel and Dimed to see what the fuss was about.

Barbara Ehrenreich, hardly the Marxist described by her critics, goes undercover and tries to make ends meet by working a succession of low-wage jobs.  Her experience underscores the near impossibility getting ahead, or even keeping one’s head above water, when you’re making minimum wage.

What’s interesting is that the book was written after the first wave of welfare-to-work initiatives imposed in several states during the Clinton administration. Things are undoubtedly much worse now. Then, there were still federal and state programs to help the working poor, if you knew where to look. Now there is almost nothing.

I must say, it’s a shocking book, and a depressing one. Workers, often single mothers, cannot live on one minimum wage job. They have to work two and even three, and still cannot afford anything but the basics: a roof, food … and often not even that.  Cheap apartments or trailers are increasingly impossible to find, and the trend is for several low-wage workers to live together in weekly-rate motel rooms. Miss a day or two of work and you’re out of a job. Get sick, ditto. Your junker breaks down? Sorry, Charlie, and where did you get the idea trash like you was entitled to a car in the first place?

After reading Nickel and Dimed, it occurred to me that if I were to re-read Les Misérables, I’d probably find that not much has changed since Jean Valjean’s day.

Critics and political commentators have attempted to belittle Barbara Ehrenreich for undertaking her experiment, trying to make ends meet with a succession of waitressing, housecleaning, and low-end retail jobs paying, at most, $7 an hour, when all along she had an out: she could have returned to her comfortable life at any time, and she could (and did) move on to different parts of the country when she got bored and discouraged with any particular location and job. They characterize her as a rich dilettante, playing at being poor in order to sell books.

But the book needed to be written, and in my opinion high school kids (ye gods, especially high school kids) need to read it. Could a real single mom, slaving away at two or three part-time benefitless minimum wage jobs, have given voice to the plight of minimum wage workers in America today? I thank Barbara for taking on the project. It can’t have been fun.