But I Don’t Know Anyone Who Has It

(Professor Farnsworth voice) Good news, people! Our neighbor Alan is going to chop down our dead mesquite trees and haul them away. It’s a win-win: we clear out our back 40; he gets a winter’s worth of wood.

Alan’s conscientious about wearing masks when he’s around other people, as are we. He and another neighbor he enlisted to help came by Sunday to discuss how best to access the back of our lot. The four of us talked it over on our patio in varying degrees of discomfort, because the second neighbor was unmasked and not making the slightest effort to maintain distance.

Yes, the four of us — the odd one out was uncomfortable too. He knew what he was doing, standing close and not wearing a mask, and knew it bothered everyone else. Not uncomfortable enough to stand back and fish a mask out of his pocket, but enough to feel he had to explain himself. He ran down the standard list of justifications: he hadn’t been in contact with anyone who had COVID, he felt fine, he didn’t know anyone who had it. 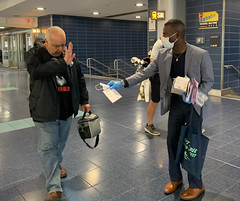 His opposition to masks didn’t come across as political or tribal. He didn’t give off a maskhole-acting-out-at-Starbucks vibe. Rather, he came across as a normal guy who’d convinced himself COVID wasn’t a threat simply because it hadn’t touched him personally — he didn’t know anyone who had it.

It’s an insidiously persuasive argument. We’ve all seen people advance it on Facebook and Twitter. I’ve done it myself — for a few days during the Reagan administration, I went around saying the same thing about AIDS. Until I remembered, that is, elementary school classmates who died of scarlet fever or were crippled by polio. Then I dope-slapped myself and tried to quit being such a jerk.

We do know someone who got COVID, actually, but that was back in February when the pandemic was just beginning, and anyway, he lived; since then no one close to us has gotten it, never mind died from it. The law of large numbers means that COVID infection and death rates could double or even triple before we’re personally touched by the disease. That doesn’t mean it isn’t killing people in record numbers, though. It’s surging everywhere, and if it continues its exponential growth we will be touched. Public health officials are asking American families not to travel or get together this Thanksgiving. Some are already warning us not to go to grandma’s for Christmas. It’s a test, for sure, one made harder by all the people who for various reasons refuse to go along with masks, social distancing, and stay-at-home pleas.

I don’t think our new president will try to impose mandatory mask, quarantine, and stay-at-home orders. There’d be too much resistance, and with vaccines on the horizon even some of those who would normally comply will be tempted to let their guard down. Our society has chosen the path of voluntary compliance with COVID prevention measures, and from what I see about half of us — along with, happily, most institutions, school, and businesses — are doing our best.

With effective vaccines likely to become available early next year, those of us who do recognize the threat may only have to hunker down a few more months. Anticipating relief doesn’t make this time of testing easier; we ourselves just backed out of a long-planned road trip to visit the kids and celebrate our grandson’s birthday in Las Vegas, and we’re already talking about what kind of takeout we’ll order for the two of us on Thanksgiving and Christmas.