I see the horizon. A light blue, a beautiful band. This is the Earth. How beautiful it is! All goes well.
— Valentina Tereshkova, the first lady astronaut, quoted by Mary Robinette Kowal in The Relentless Moon (Lady Astronaut #3) 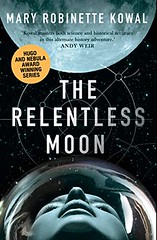 From my review of “The Calculating Stars (Lady Astronaut #1):

Pining for some good science fiction, I decided to read one of the 2019 Hugo Award finalists. “The Calculating Stars” surprised me in several ways. The science fiction is almost entirely fact-based, couched in an alternate-timeline world where space exploration — satellites, manned spaceflight, and flights to the moon — developed a few years earlier than in our timeline, spurred by the impact of a large meteorite off the eastern seaboard of the United States, an extinction event forcing mankind to consider the possibility of getting off the planet before it is no longer habitable.

The novel is also a social history, very closely based on our timeline’s history of resistance to racial and gender equality. Quick aside: one of the most interesting parts of the novel, to me, is Mary Robinette Kowal’s afterword, where she compares our actual history and progress with that of the world she built for this novel.

From my review of “The Fated Sky (Lady Astronaut #2):

… as a primer for human factors that will affect astronauts and space voyagers in our timeline, the Lady Astronaut series seems sociologically and scientifically sound, and Mary Kowal, if you read her fascinating afterwords to the novels, shows that she’s done her research: everything she speculates about seems realistic, predictable, and probable.

I eagerly awaited the publication of “The Relentless Moon (Lady Astronaut #3), which I had pre-ordered after finishing “The Fated Sky.” It did not disappoint.

The action in “The Relentless Moon” occurs on Earth and the Moon while the Mars mission that was the subject of “The Fated Sky” proceeds in the background (also in the background: Elma York, the lady astronaut herself and narrator of the first two novels in the series). “The Relentless Moon” is told by a secondary character from the first two novels, Nicole Wargin, who despite her age (50) and political role as wife of the governor of Kansas, is still active in the space program and becomes the key player in unraveling a Luddite plot to sabotage and end the space program.

The action is riveting and the science is as good as it gets. As with the first two novels, the alternate timeline is so very close to our own I sometimes felt part of Mary Robinette Kowal’s fictional world, as if I’d awakened from a fitful sleep and realized we actually did get hit by a meteor and start going to space in the 1950s. As with the first two novels, social history and change is as important as space exploration, and once again the author’s afterword adds immeasurable value to the novel itself.

The three novels are as much about our own timeline and history as they are of a fictional, post-meteor world’s; this one was the best yet. I hope it isn’t the last. 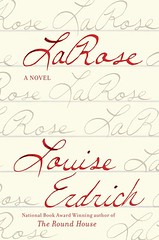 My book club decided to read a work by a Native American woman for August 2020. We picked “LaRose” from a short list of titles. I’d been on a pleasure reading jag, devouring thrillers, mysteries, police procedurals, and science fiction, and didn’t think I’d get into this novel at all. Boy, was I wrong.

It may have helped that I lived in Northeastern Montana for a year, just outside the Fort Peck Indian Reservation, working with a mix of white and Native American adults. I easily fell into the vibe of the novel’s North Dakota setting, with the town of Pluto and its nearby reservation. What made me feel most at home, though, were Erdrich’s vividly drawn and sympathetic characters.

I’m generally cold to magic realism in fiction, but so much of Native American spirituality seems, to an outsider like me, both magical and real, and in the context of this novel’s story right, proper, and essential — especially in telling the story of LaRose and the generations of LaRoses who came before him.

Short passages about the life of the first LaRose, born in the 1830s, are interspersed throughout the main narrative, which follows the lives of the current LaRose and the families who raise him in the early 2000s. Those passages were a major pull, and I eagerly looked forward to them. I had forgotten about the Year 2000 panic; Peter Ravich’s losing gamble on having his debts erased and forgotten on the stroke of midnight, January 1st, 2000, were a welcome touch of humor, as was the addled scheming of Romeo (and the revenge taken on him by the elderly women in the reservation’s assisted living facility). Nola and Maggie — my god, what great characters. Well, hell, they all are.

There aren’t many novels I’m sad to see end. This one could have gone on and on. 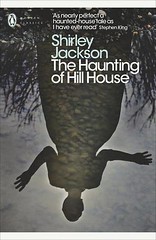 The Haunting of Hill House
by Shirley Jackson

Members of my book club chose this horror classic for our October 2020 read. I have of course read “The Lottery,” but until now that was my only acquaintance with Shirley Jackson. After “The Haunting of Hill House,” I will likely read more.

The edition I read starts with an almost 30-page academic guide, which I skipped over to get to the story. I might have read and appreciated it as an afterword, but as a preface it only got in the way.

The more I think about Eleanor, or Nell, the more ambiguities I see — she’s the perfect match for Hill House and I’ll go to my grave believing she lives there still. We learn so much about the four main characters who take up temporary residence there, but about none so much as Eleanor (though I did enjoy the hints of lesbianism in Theodora, a forbidden topic at the time Shirley Jackson wrote the novel).

Horror stories in general leave me cold, but I’m all in for Hill House, a masterpiece of the genre with its blend of hints and specificity, of details and startling facts slowly revealed as the plot advanced. I keep coming back to Eleanor, and there’s a reason: my entire perception of her changed over the course of the book, and even now, a full day after finishing it, is still changing. I can’t wait for the book club discussion to see if other members were as affected by her as I was. 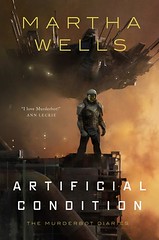 I was delighted with this introduction to the Murderbot. I didn’t expect much of a novella, but this one was meaty and fulfilling. There’s a lot of gee whiz science fiction here, on an alien planet no less, along with interesting world-building about future human societies, but true to the series title, “The Murderbot Diaries,” it’s told on a chatty, personal level by the very human Murderbot itself, and though it would wince at my praise, Murderbot is a first-rate story-teller. Based on this first read, I expect the overall Murderbot series to be a great, fun read.

“Artificial Condition” is as delightful as its predecessor, and delves into a mystery introduced by the Murderbot in its first diary, so it satisfies as well. I thought it was too short, though. I don’t think I’ve ever wished an author would have added more padding, though in this case there were several promising tangents Martha Wells could have explored a bit more (like the extended human family relationships of the clients who hire the Murderbot to help them retrieve some stolen documents), and it wouldn’t have been mere padding to do so. Nevertheless, I look forward to more installments in this series, where Ms. Wells probably does just the padding I long for. 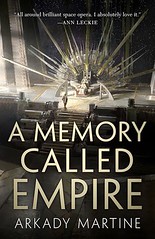 My initial reaction: interesting, but not enough action. “A Memory Called Empire” is a mix of court drama and romance, with a few science fiction elements to pull the reader along. The science fiction — the imago technology, the spooky threat of mysterious alien three-ringed ships popping through wormholes on the borders of the Teixcalaani empire — motivated me to wade through page after page of flowery expository prose, but there wasn’t enough of it to make me want to read the sequel.

In nearly 500 pages, Arkady Martine introduces fewer than a dozen working stiffs, none of them developed to any degree: a few Sunlit cops, a handful of agitators in an outer suburb of the imperial city. Everyone else save Mahit, the ambassador from the remote mining station Lsel (and the imago memories and emotions of her predecessor), is a courtier, a patrician, or actual royalty. Mahit is a barbarian at court, where society’s betters engage in Game of Thrones intrigue — and until the final pages, more than willing to go along with it all, in awe of everything Teixcalaani.

By the way, how does one say Teixcalaan? Or Lsel? I stumble over stuff like that and find it irritating. For an author who loves exposition as much as she does, you’d think Arkady Martine could have worked a couple of pronunciation hints into the dialog. 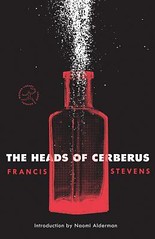 The Heads of Cerberus
by “Francis Stevens”

Interesting. That is the best I can say of this story, a blend of fantasy and science fiction written in 1918 or 1919 by Gertrude Barrows Bennett under the pen name Frances Stevens, not published in book form until 1952.

It is touted as the first popular work of SF to introduce the concept of parallel worlds. By the time it was printed in 1952, the concept of parallel worlds was old hat; whether it would have been the first to introduce it had it been published in 1919 when Ms. Bennett wrote it is debatable. Nevertheless, it is certainly a pioneering work, and worth reading to anyone who wants a good grounding in the genre.

I wrestled with the need for a Ulithia dream stage between alternate worlds, and hated the characters’ casual attitude toward snuffing out 2118 Philadelphia and the lives of its inhabitants once they are safely back in their own 1918 Philadelphia (wouldn’t the people and lives they encountered there be as real as their own?). I was restive as well with my first look at 2118 Philadelphia, but the lack of change in technology was eventually explained in the narrative.

The florid and overly polite language spoken by the travelers from 1918, in particular that of the “wild Irishman” Terry, reminded me of the dialog in a Harry Stephen Keeler novel, and once that comparison lodged in my head I was unable to shake it. I’ll just point out that the dialog in Bram Stoker’s “Dracula,” written in 1897, manages to feel contemporary and real to this day (and “The Heads of Cerebus” was written more than 20 years later). I’m not at all sure why Ms. Bennett decided to insert such stilted, stagey, stereotyped language into her characters’ mouths, and I’m relieved she didn’t add a Black character, or indeed any commentary on race or ethnicity (beyond the Irish, that is).

One bit of prophecy sticks in my mind: a character in 2118 Philadelphia, explaining history to a character from 1918 Philly, mentions the “world wars” of the 20th century as the catalyst for freezing technological development and preserving Philadelphia in a stagnant state. Good job seeing the second one coming, Gertrude … most of your contemporaries didn’t.

An interesting and probably important read for students of science fiction, but honestly too dated to be much fun or to create any sense of wonder.