Dog Days for the Hard of Hearing 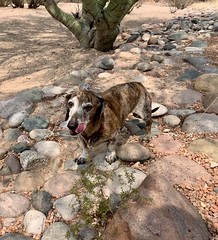 It’s National Dog Day, which I learned from the Facebook account of Crusoe the Celebrity Dachshund, who lives in Canada. Too bad Maxie and Mister B aren’t Canadian, I thought, but then I started seeing National Dog Day greetings from American friends. Well, that’s what Google’s for, right? I now know National Dog Day is an American thing, started in 2004 by Colleen Paige, “pet lifestyle expert,” who’s also the force behind National Cat Day and National Puppy Day. I commend her for picking a day in August, the traditional “dog days” of summer.

Some people call it “International Dog Day,” which I guess is where our pups’ Canadian buddy comes in. There’s no such day on any list of internationally-recognized observances I can find, but according to Ms Paige’s website, “While Colleen’s holidays were born in the USA, they have now expanded internationally, celebrated in countries such as the U.K., Ireland, Italy, Australia, New Zealand, Israel, Spain, Guam, Scotland and many more.” Canada too, obviously. In other words, it’s an international observance because people in more than one country say it is. Good enough for me.

I’m blogging in the afternoon, which feels odd to me. I usually write in the morning, and indeed I did today, but what I worked on was a letter to a friend. An old-fashioned letter, the kind you seal in an envelope, put a stamp on, and put in the mail. That task expanded into the early afternoon, and now it’s almost time for dinner, but I wanted to acknowledge National Dog Day on the blog before it’s too late.

Donna surprised me by watching the Republican National Convention last night. I think she wanted to watch Melania’s Rose Garden speech. I caught bits of earlier speeches before the barrage of gaslighting and lies sent me whimpering to the home office, but Donna stayed for the entire program and this morning made me look at clips of Melania. Having watched JoJo Rabbit on HBO the night before, I was struck by how closely Melania’s outfit resembled certain historical uniforms. Brown, too. Not very subtle, but what is with that trashy family?

Speaking of watching TV, one of the problems that’s come with age, one we’re embarrassed about when we have company over, is needing to crank the volume up to hear what people are saying on TV. Lately I’ve taken to holding the remote in my hand so I can thumb the volume down during music and sound effects, then thumb it back up when people are speaking. We both love streaming foreign-language shows, not just because they’re good entertainment but because the subtitles mean we don’t have to crank it up to 11.

A few days ago we started turning on closed captioning for some of the British shows we follow. It’s hard enough hearing what the actors are saying anyway, but regional accents and unfamiliar slang make it even harder, and we were constantly rewinding scenes to get a better sense of what was going on. Watching Brit shows with subtitles on, the same way we’ve been watching foreign-language shows all along, has been a revelation. Just as much fun, no more rewinding, and the neighbors no longer have to listen to our TV booming through the walls.

By now, closed captioning has become our default mode for everything: not just American shows but Canadian ones as well (be honest, do you understand everything they’re saying on Letterkenny?).

Sure, we’ll be embarrassed in a different way when our friend Mary Anne comes over to watch old episodes of Justified with us, but at least we won’t be battering her eardrums like before. Getting old is one surprise after another. You never know what subsystems are going to start to fail next. We’re thankful our age issues have been minor ones, and long may it stay that way.

One thought on “Dog Days for the Hard of Hearing”