The Pee Is Silent

Donna’s Uncle George is in his last days. Aunt Jan asked if Donna could come see him again before the end, so Donna’s with them now in Elk Grove, California. She said she’d book a return flight today, probably for next week. George is the last surviving sibling of Gloria, Donna’s mother, who died several years ago. One of Donna’s father’s sisters, Aunt Joyce, lives on, also in northern California. She’s in her nineties now, so I expect Donna has another trip in her future. Donna’s close to both George and Joyce.

As if that isn’t enough, the day Donna left for California her younger sister Georgianna, a frequent visitor here, went into hospital in Detroit with a pulmonary embolism, and had Donna known that was going to happen she’d be in Michigan now rather than California. But Georgie and Donna’s sister Robin, who lives near Detroit but as it happened was in California visiting her daughter and granddaughter, was able to fly back and is there with Georgie now. Last I heard my own sisters are well, so there’s that … I can hold down the fort in Tucson with a relatively clean conscience.

I’m home with Polly and the pups. I should be writing, or at least blogging. Since I stay abreast of events with Google News, the online editions of Reuters and The Guardian, Wonkette, and Twitter, I’ve been skipping Rachel and the gang at night and instead catching up with my kind of streaming TV, the stuff Donna won’t sit through with me, mostly science fiction. Commenting on the flood of appalling current events makes me feel dirty and cheap, as if even engaging with it brings me down to its level, and in any case, what do I have to say that others haven’t already?

I’ve learned a little more about what’s going on vis-à-vis vanishing volunteers at the air museum, enough to point a finger if pressed (unsurprisingly, that finger points right where I suspected it would), but I’m going to irritate you by being coy and vague for now. Anyway, turns out the behind-the-scenes volunteers in aircraft restoration feel every bit as unvalued and unwanted as the volunteers who work with the public. Moreover, a little bird tells me management harbors a particular disdain for the tram team, so I expect my colleagues and I will, sooner rather than later, be looking for other volunteer opportunities. When that time comes I’ll be more specific as to what’s going on.

Here’s a selfie I took at the museum this Monday, using the portrait mode on my iPhone camera. That’s a TBM Avenger in the background. 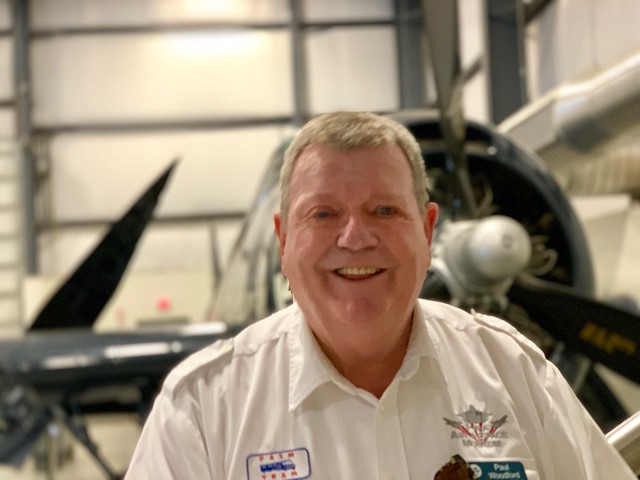 My right eyelid has always drooped, even when I was a child. The condition is called ptosis, and apparently I share it with Sarah Huckabee (shudder). Since it’s worse when I’m tired, I take selfies in the morning. Looking back through my I Love Me collection (yes, I save them … don’t you?) I see myself hiding behind sunglasses more often than not. I dislike myself for trying to hide my flaws. So I’ll try harder not to. What the hell, I’m 72 now, like most people my age a bloody wreck, lucky to be alive at all.

With that cheery thought I’ll sign off. More soon.

One thought on “The Pee Is Silent”