Again with The Thing? 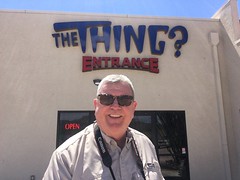 There’s a menu bar across the top of this blog. Click on About Paul’s Thing and you can view a short photo-essay about this blog’s namesake and inspiration, The Thing?, a roadside attraction on Interstate 10 near Dragoon, Arizona, 67 miles from my door in Tucson.

I know the exact mileage because I set the trip odometer to zero before hopping on my motorcycle this morning for a ride to The Thing?, which I heard had been remodeled and improved.

I wanted to see it again, take some new photos, and share my visit with you. Let me tell you, The Thing? really has been remodeled and improved. Everything inside looks brand new, and the exhibit itself, which you have to pay a small fee to see, now has aliens! And dinosaurs too! 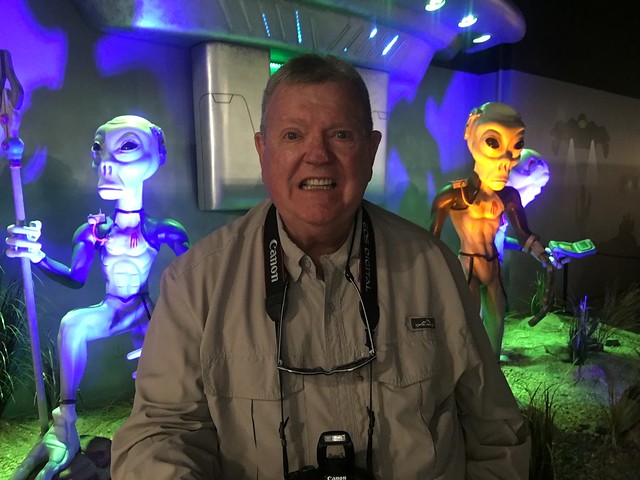 My last visit was in 2015. Back then the exhibits were dusty and shabby, as you can see in the photoblog I posted then. Here’s a then & now to give you an idea:

If you have a sharp eye you can see they repainted the Roller and put a different passenger in its back seat (and a different chauffeur in the front seat as well).

The Thing? itself is a mummy, originally said to be that of a Native American or Chinese immigrant woman. It’s not real: it was created as a circus sideshow attraction in the early 1900s. In the 1940s and 50s it was a tourist landmark on Highway 91 in California’s Mojave Desert. It’s been in its current southeast Arizona location since 1965. Here’s the mummy in 2015, and in its new display case today:

The mummy used to be the centerpiece of the exhibit, but today it’s all about the dinosaurs and aliens, and I guess we’re supposed to think the old girl is an alien? I’m not clear on that. The life-sized dinosaurs and aliens are well done, in any case, and the walls are covered with What If? speculation about alien visitations from the days of dinosaurs right up to the present. Here are a few more photos from today’s visit:

I had a nice chat with the folks running the place. They told me they’re cleaning up some of the old exhibits and plan to put them back on display, but they’re committed to the dinosaurs and aliens theme. They’re starting to put “alien writing” on some of the walls and plan to give younger visitors decoders. I broke down and confessed to publishing a weblog with a The Thing? theme, but they still charged me regular admission: $4.24. I asked why not $4.25 and they couldn’t or wouldn’t tell me. It didn’t occur to me until I was halfway back in Tucson, but I bet they had a penny pressing machine and I could have turned that odd little penny into a souvenir.

Oh, did I mention souvenirs? God, I am such a mark!