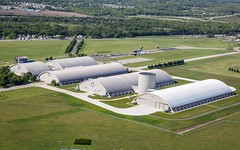 Well, I call it the Air Force Museum (and so does everybody else, including the people who work there), but in reality it’s the National Museum of the U.S. Air Force, located at Wright-Patterson AFB, Ohio. And it’s one of the holy grails of the air museum world.

I had an opportunity to visit in the early 1980s, when I flew as number two from Elmendorf to Wright-Patterson with my F-15 wing commander. He had a three-day conference to attend and I had nothing to do in the meantime, but rather than stay and check out the museum I took a civilian flight to Missouri to see my family, returning just in time to fly back to Alaska with the boss. I don’t regret the decision, but ever since I’ve been promising myself to make up for missing the museum the first time around.

My wife and I were scheduled to fly to Missouri in early October for a family reunion in Cape Girardeau. Since we’d have a rental car, I checked Google Maps to see how far it was from Cape G to Dayton, Ohio, where Wright-Patterson AFB is located. Six hours? Piece of cake … and thus I was finally able to make good on my promise to visit.

In the 1980s, the Air Force Museum was mostly outdoors. Today, as you can see from the thumbnail at the top of this post, it’s all indoors, with just a small adjoining outdoor display of four to five planes (probably so people can tell from the outside that it’s a museum).

I’m a volunteer docent at Pima Air & Space Museum in Tucson, Arizona, which has approximately the same number of aircraft as the Air Force Museum. To date, the foundation that funds our private museum has built five hangars, enough to house approximately half our collection. There are plans to build additional hangar space, but money has to be raised first. Some day, perhaps all our planes will be under cover, but that day is far off in the future, and for now some 150 aircraft are on display outdoors, exposed to the sun, wind, rain, and dust of the Sonora Desert—and they show it.

The Air Force Museum is taxpayer funded, rich in comparison to privately-funded air museums. Thus the big hangars, thus the clean and shiny aircraft on display inside them. What’s not to like about that? Well, one thing, which I noticed right away … it’s relatively dark inside those big hangars, and the small flash attachment on my Canon DSLR wasn’t enough to overcome it, particularly inside the Early Years and WWII galleries, located in the oldest hangar. I did my best to overcome that, mainly by shooting in manual mode with the aperture wide open.

Appropriately for an Air Force museum, the aircraft on display are virtually all USAF or Army Air Corps. There are a number of foreign aircraft as well, trophies of wars fought and won (or lost, as with Vietnam). The aircraft are also grouped by era, major conflict (WWI, WWII, Korea, Cold War, Vietnam), and (in the case of missiles, presidential planes, and experimental aircraft) by mission.

I didn’t photograph too many of the aircraft I see every week at Pima, concentrating instead on the ones we don’t have. Pima doesn’t have anything newer than the F-15 and F-16; the Air Force Museum has an F-22, a YF-23, a B-1, and a B-2. I went a little crazy in the Presidential and Research and Development galleries. We have one former Air Force One at Pima, along with a mock-up of an X-15. The Air Force Museum has nine presidential aircraft, including Roosevelt’s Sacred Cow, Truman’s Independence, Ike’s Columbine III, and SAM 26000, the famous Kennedy jet; the Research and Development Gallery has the X-planes, including a real X-15 (and the unearthly XB-70 Valkyrie bomber, dwarfing everything else in the hangar).

What didn’t I see at the Air Force Museum? Surprisingly, they don’t have an F-35. No C-5, no KC-135. Chuck Yeager’s X-1 is at the Smithsonian, so that’s understandable. Among the things they do have (and over which I geeked out) were super-cool aerial weapons displays, particularly the early Falcon air-to-air missiles mounted on internal launchers of F-102 and F-106 interceptors. I was happy to see both the Air Force Museum’s F-15s were A models, since half my time in the Eagle was in that type. I must include this note: the Air Force Museum’s space shuttle isn’t real: it’s a mock-up, which makes me feel better about my museum’s phony X-15.

Was I a kid in a candy store? You bet your ass I was, and I wish I’d had another full day at the National Museum of the U.S. Air Force!