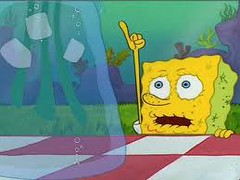 I had an unusually vivid dream last night. I was part of an exiled group of people living under water in an ocean or maybe a lake. The tribe from which we’d been banished lived on land near the shore. We figured out a way to breathe air again and came up out of the water at suppertime to invade the homes of the land-dwellers, who ran away in the dark. I was the leader of the raiding party. As we pillaged the village a continuous buzzing sound began, slowly getting louder. We succumbed to confusion and began to forget what we were there for. I realized the land-dwellers were using some sort of weapon and tried to warn my fellows, but the buzzing interfered with my ability to speak. I was just able to grunt out “They av a way-pon wee mus figh.” I woke myself up, saying “Mus figh.” God knows what Donna must have thought.

I owe that one to Spongebob Squarepants. Our goddaughter Natasha is staying with us this week, along with Georgianna, her five-year-old. We added Spongebob and some other children’s programming to our streaming TV watchlist, and two nights ago watched an episode with her. In that episode, Spongebob tried living on land with a squirrel he’d befriended, quickly realizing air was not his medium.

A children’s cartoon gave me a bad dream. I’m not sure what that says about me, but I don’t think it’s anything good. With luck, Spongebob won’t be back to disturb my sleep. But once every year or two, I’ll wake up from one of three recurring nightmares.

The first one, or a variation of it, I think most of us have had: we wake up during finals week and with a sudden chill remember the three-credit class we signed up for but never attended.

The others are probably my own. For your sake I hope so.

In one I’m crawling through a cave in the dark, squeezing through vertical and horizontal passages, something I’d be terrified to do in real life. I can’t back out but can only go forward, deeper and deeper. I finally get to a horizontal layer which gradually opens up enough to allow me to stand, and find myself in a busy but sinister subterranean office, with, people, desks, and telephones.

In another the Air Force has asked me to fly the F-15 as some kind of senior adviser to an active squadron, but it’s been years since I’ve been in a cockpit and I have to check off a long list of squares before I can actually fly: get outfitted with a new flight suit, G-suit, harness, and helmet; go through ejection seat and parachute training; visit the altitude chamber and take a ride in the centrifuge; sit through hours of academics and pass tests; go through the instrument refresher course again. By the time I get all the squares filled some of the earlier training has already expired, so it’s back to the altitude chamber and centrifuge; then the jets get new radars and I have to take new courses … well, you get the idea: I never get to the damn airplane. It’s not really a nightmare, more of a frustration dream.

In the last, which is a little embarrassing to share, I’m in a huge house and need to go to the bathroom, but the only bathroom has multiple doors open to other rooms, all of which are full of people, many of whom are also looking for the bathroom. I try to close and lock all the doors, but every time I sit down on the toilet I realize there’s another open door and someone staring in at me. I wake up from that one terrified I’ve soiled the sheets, but (so far) that hasn’t happened. Now there’s an anxiety nightmare for you!

Click “like” if you think the presidential candidates should have to file forms listing their recurring nightmares. Clearly, the people have a need to know!

One thought on “To Sleep, Perchance”