Dare I bore you with two short GoPro clips from my Sunday ride to Mount Lemmon? I don’t know about you, but I think it’s great there’s a road just one mile north of our house leading up into the Santa Catalina Mountains, sky islands high above the blazing heat of Tucson, Arizona. Now if only San Diego wasn’t eight hours away!

The road (officially named the General Hitchcock Highway) is 27 miles long, and climbs from the Tucson valley floor at approximately 2,500 feet above sea level to the 9,157 foot summit on Mount Lemmon, one of the peaks making up the Santa Catalinas. The highway was built with prison labor, overseen by the aforementioned general and soldiers under his command. It took them 17 years, from 1933 to 1950, to finish it. The remains of a prison camp are located about halfway up.

The village of Summerhaven, near the top, has a general store, a coffee shop, a restaurant, a campground, a small fire department, and a hundred or so mountain cabins. Just up the hill from Summerhaven is a ski area and an observatory operated by the University of Arizona. There are bears in them thar hills, along with deer, mountain lions, bobcats, ringtailed cats, and wild turkeys (in 2003, we saw bears and mountain lions in our neighborhood at the foot of the mountains, refugees from that year’s big forest fire). If you wondered about my use of the phrase sky islands, that’s the indigenous name for the Santa Catalina Mountains.

I recorded the first clip on the way up, climbing from 3,000 to 5,000 feet. From the foot of the mountain to the vista pullout where I started filming this clip I had been stuck behind a cluster of cars and pickup trucks, led by a timid soul who slowed to a crawl at every hairpin curve. I waited in the pullout until the slowpokes disappeared in the distance, then pulled back onto the road. I had to do this a few times during the ride, but it was worth it. If I never pulled over to wait for traffic to clear, all you’d see would be the backs of cars ahead of me. 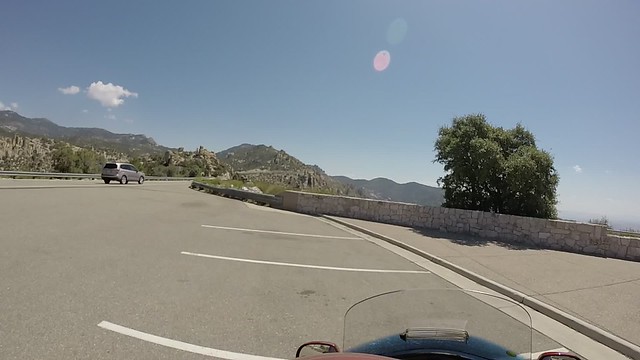 The second clip is from my ride back down, descending from 7,000 to 6,000 feet on my favorite section of the highway, out of the pine forest and onto the bare side of the mountain, with cliffs, sheer dropoffs, and fascinating rock formations. 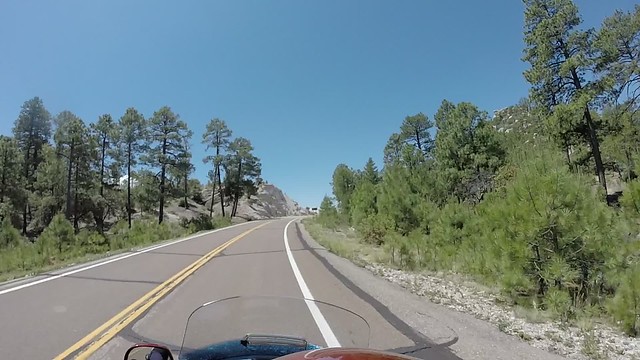 I posted several other clips from Sunday’s ride to Flickr. You can click here to see them.