I’m back from my dry run at the museum. I borrowed the volunteer golf cart and drove the tram tour route, talking about all the aircraft I plan to cover on live tours with visitors once I certify. If anyone saw me putting around, gesticulating and talking to myself, they probably thought an insane person had hijacked a golf cart.

I finished my practice run in an hour and ten minutes, managing to say something intelligible about each of the aircraft on my list, so I think I’m about ready. We’ll soon see if the tram tour docent team leader agrees.

I learned of this outing-with-a-twist last night on Twitter. Within a few minutes of the first link being posted, condemnation and piling on had begun, as it so often does on Twitter. The emerging consensus seems to be that while it’s okay to be transgender, it’s not okay to be transracial.

I’ve been busy this morning and haven’t revisited Twitter to see if opinions have changed, but from the links and comments I’m beginning to see on Facebook, I think most people disapprove of what this woman supposedly did.

I hate trials by social media, based as they always are on incomplete information. The as-yet unanswered questions are why this woman pretended to be black and why she sought leadership positions in the Spokane NAACP chapter. It comes down to motivation, doesn’t it?

I think, regardless of this particular woman’s motivations, the collective judgment of both the white and African-American communities will be that it’s not okay to be transracial, no matter what your motivation might be. You have to be real to be real.

I remember thinking something along these lines as a kid, back in the early 1960s when a white journalist wrote a book called Black Like Me. He had worn blackface and ridden Greyhound buses through the American south to experience racial discrimination first hand, then written about it afterward. I wondered at the time why black writers couldn’t write about their own experiences. I learned later that many black writers had done exactly that, and brilliantly, and subsequently thought Black Like Me was patronizing: we didn’t need white people telling us what black people were experiencing.

This story also brings to mind the TERFs, the trans-exclusionary radical feminists, who do not want trans women crashing the movement.

How much more interesting this is than Caitlyn Jenner and the Duggars! I can’t wait to hear more.

After I wrote about the swimming pool mini-race war in McKinney, Texas, I started seeing “here’s what really happened” apologias on conservative websites. I realize there are two sides to every story, and said so in a comment to my blog post after a couple of friends took me to task for making judgments before the facts are in.

The apologias on conservative websites tried to establish some heretofore unknown knowns: that the black kids started the fight after white residents of the condo complex complained about their loud hip hop music and politely asked them to leave. More information has come out since. Today’s known knowns are that a white guy once convicted of torturing animals called the cops, and that two white ladies started the fight by punching the kids while screaming racial epithets. Of course one known known all along, thanks to the video, was the cop’s out-of-control behavior.

I’m gonna stick my neck out one more time and say you can write this entire incident off to good old American racism.

This latest development is coming from the same place, American racism: 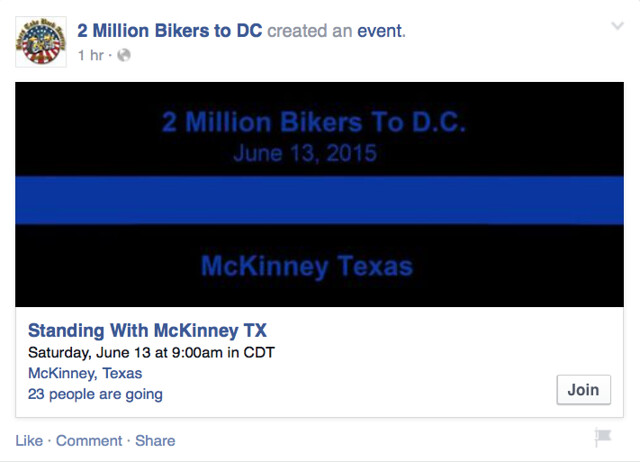 According to at least one liberal news site, a group of scary armed bikers is planning to descend upon McKinney, Texas this weekend to protest the treatment of the out-of-control cop (who has already resigned). The news site is trying its best to make the biker protest look like a big deal, but from what I can tell (see the screenshot above) less than two dozen bikers have signed up to ride to McKinney on Saturday.

Still, this, along with the recent armed biker protest at the mosque in Phoenix, Arizona, makes bikers look like racist thugs and skinheads. I’m a biker, and I certainly don’t want to be lumped in with the Aryan Nation crowd. I hope the media doesn’t go overboard with biker scariness.

Lastly, good old NPR. Two days ago Diane Rehm had Senator Bernie Sanders on as a guest. Now Diane’s act is to always show “balance,” no matter how settled the issue under discussion. If her guest is there to discuss climate change, she’ll turn half the show over to a climate change denier from the oil industry. If her guest wants to warn us that they’re teaching the Book of Genesis in science classes in Louisiana, she’ll give a creationist equal time. Everything comes out looking like a 50/50 proposition on the Diane Rehm show: maybe infanticide is bad, maybe it’s not, who’s to say?

Two days ago I guess she thought she’d just dispense with the contrary guest and attack Bernie Sanders herself: a few minutes into the interview I was shocked to hear her say, “Senator, you have dual citizenship with Israel.”

Sanders was quick to respond. He made it clear he is and has always been an American citizen, that he is not and has never been a citizen of Israel or any other country. He asked Diane where she got her information, and she said it was on a list she had gotten. Sanders said the list is an internet hoax. You could tell he was steaming.

And then Diane asked the same question again by saying, “So it isn’t true you’re a dual Israeli/American citizen?” There was, I thought, a palpable note of nastiness in her voice. Now I’m going to guess that Diane Rehm is a Hillary Clinton supporter, so I’m not surprised she’d take the gloves off with Bernie Sanders. I am surprised at her naked appeal to anti-Semitism.

Because the question is, in fact, anti-Semitic. It’s meant to cash in on anti-Semitism. The purpose behind the false dual citizenship assertion is to remind voters that Bernie Sanders is a Jew. The perpetrators don’t want to look like outright bigots, as they would if they merely shouted “Bernie’s a Jew”; they try to be clever by doing what a previous generation of religious bigots tried to do to John Kennedy when they asked him if his Roman Catholic religion would make him more loyal to the Pope than to the USA. The purpose then was to alert Protestant voters to the fact that JFK wasn’t one of them; the purpose today is to alert Christian voters to the fact that Bernie Sanders isn’t one of them.

I’m starting to wonder how many voters will never vote for a woman candidate. We won’t know until election day, because most of them will never admit it.

God, people suck. I guess that includes me, because I will never vote for a Republican.