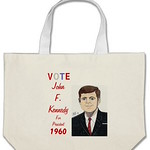 I wasn’t old enough to vote for JFK, but I remember watching the Nixon/Kennedy debates and talking up the far more charismatic Kennedy with my junior high school classmates.

I came of voting age shortly before the 1968 presidential election, in which I voted for happy warrior Hubert Humphrey. We were in California then, but I don’t remember who was on the ballot for Congress … Reagan had been elected governor the year before, so he wouldn’t be on the California ballot again for three more years (I didn’t vote for him when he came up for re-election).

I’m ashamed to admit I skipped a few mid-term elections over the years, but I vote in every presidential election, and I did vote in today’s mid-terms, two weeks ago by mail-in ballot. Seriously, I don’t know why everyone doesn’t vote by mail. No hassles with voter ID, no lines, no sweat. You can take as much time as you need with your ballot, checking different candidates’ records and reading up on propositions online before deciding which circles to fill in. I love it.

This time around, at least in certain GOP-controlled states, voting won’t be easy for some, specifically elderly people, students, blacks, and latinos. A lot of elderly people don’t have the correct forms of ID to vote; ditto students, blacks, and latinos. Red state voter suppression is aimed at groups who traditionally vote Democratic, so I don’t know why they’d clamp down on the elderly, who usually vote Republican, but I guess their discriminatory intent would be too obvious if they let old white people vote without the right kinds of ID while turning away everyone else who’s in the same boat. Or have Republicans found a way around that by now? I suspect they have.

Florida tried to discourage traditionally Democratic voters during the 2012 presidential election. Florida voters refused to be discouraged; many stood in line for hours. I hope voters show the same determination this time around, but you know what they say: people just don’t bother to vote in mid-term elections.

Every year I remind my friends to vote, and every year I do it with a straight face, even though all evidence indicates the only “votes” that count are campaign contributions, PAC money, and industry bribes. It’s not always easy to keep a straight face when telling people their votes count, but hey, we elected Obama twice, and judging by the reaction we surprised and dismayed the people who thought they were in charge. That gives me hope.

Everyone says Republicans will take the Senate today. It’s true that voters have a record of turning against the president’s party during the final two years of his second term. That might well happen again today, but what if it does? Congress will continue to do nothing? We should be used to that by now; what’s two more years of the same? Of course if Republicans do wind up in control of the House and the Senate, they’ll be under a lot of pressure to pay up on all their promises to repeal health care and impeach Obama. Ain’t gonna happen, but they’ll have to try.

I’m not even all that annoyed with Democrats who’ve given up on their own party; too many Democrats in Congress have shown themselves to be chickenshit opportunists, in that respect no different from their Republican counterparts, and every bit as much on the corporate take.

I wish we had a parliamentary system and a multitude of parties. I’d vote Democratic Socialist or straight Socialist if I could, probably Green as well. Here, it’s winner take all, and both parties are right of center; in Europe there are many choices, and if the winning party doesn’t have enough votes to rule outright it has to make alliances with smaller parties, thus giving those who vote for smaller parties a say in government. I guess that’s my main beef these days, feeling I don’t have a say.

But still … stymieing the plans of candidates who, if elected, would try to privatize Social Security, repeal Obamacare, turn Medicare into a voucher system, tell women they can’t make their own reproductive decisions, kill off labor unions, and take away your right to vote if you’re brown … well, that’s still a pretty powerful say in things, isn’t it?