Six days sans bloggage. Silent running doesn’t come naturally to me: I get itchy, like a werewolf on the cusp of a full moon. But what’s there to say? What, for example, does a cishet white male, a 75-year-old one at that, have to say about abortion rights that’s the least bit helpful, that anyone would want to hear?

To my surprise, Charisma Carpenter wanted to hear (I’ve always known she’s one of the good ones, and that’s why I follow her). 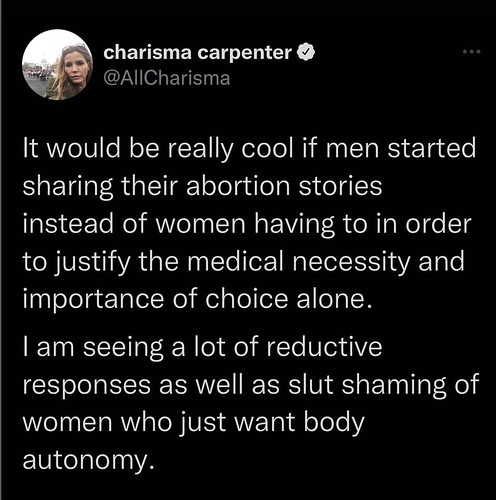 She posted this on Instagram two days ago, and I was one of hundreds of men to leave a comment. This is what I shared:

Our daughter got pregnant at 16 or 17. We lived in Honolulu then, at a time when Roe v. Wade was what we now jokingly call “settled law,” so her mother was able to help her obtain a legal abortion. They acted in secret and I didn’t learn of it for several years. I don’t know what they were trying to protect me from … had I been in the loop I’d have driven them to the clinic myself and helped them walk through the line of protestors out front.

I learned long ago, when commenting on hateful Twitter and Facebook posts, to screenshot the nasty stuff and not link to it lest racists and nazis get clicks they don’t deserve. But sharing their shit, no matter how it’s done, is sharing their shit, and leaves me feeling complicit. Now here’s a better way to do it, one I’ll definitely adopt: adding a red strikeout slash to screenshotted hate speech and disinformation: 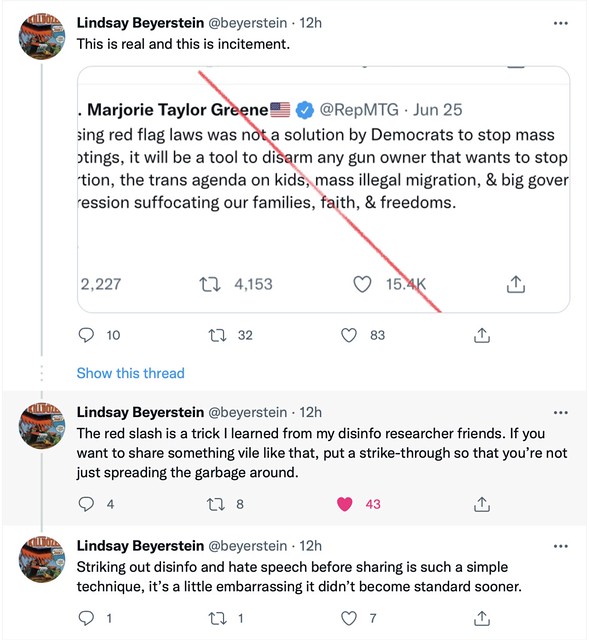 Now I just have to figure out how to do it!

Donna spent the weekend in Las Vegas with our son and his family, checking out their new house in a 55+ gated community near Lake Las Vegas. Donna said she was going to look at the models, but texted me to say she didn’t think we’d be a good fit for the place. Which is a relief because I don’t want to leave this place, which fits just fine!

Were you ever a subscriber to my Paulgram newsletter? I originally started writing them to share things I don’t normally share here or on social media. And I’ve got some personal shit to share, so I may be writing another Paulgram soon.