Our son Gregory had business in Phoenix Wednesday morning. Our grandson Quentin was already there, visiting his sister, our granddaughter Taylor. Greg and Quentin decided to come down to Tucson and spend a couple of nights with us before driving home to Las Vegas. While they were here, they planned to chop down two mostly-dead mesquite trees Donna wants removed.

Here they are, sawing low-hanging branches off a small mesquite in order to clear a path to the big ones Donna wanted cut down. 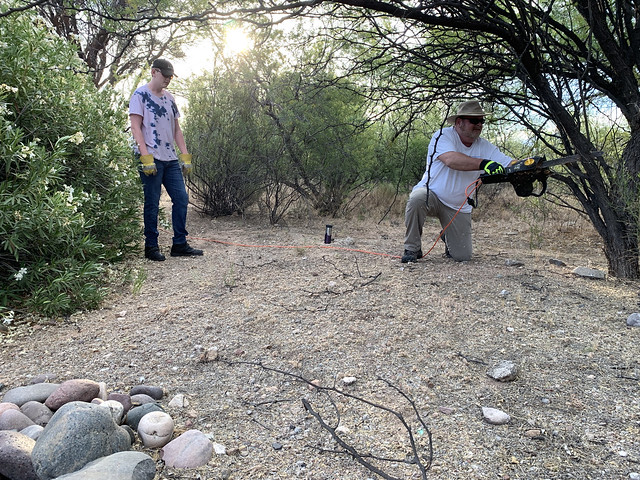 These are the mesquite trees Donna wants removed. As of this morning, they’re still there, standing behind our backyard fence. The tree removal project was a bust. 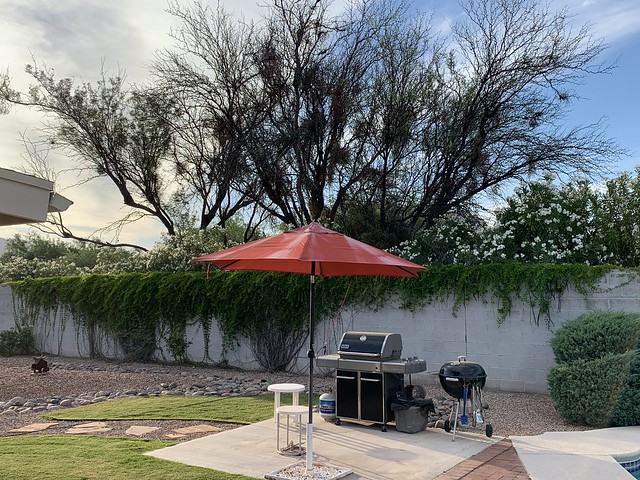 It was just too much. The working window was yesterday morning, and they did what they could before it got too hot, but it’s a job for a professional tree-cutting crew, not two amateurs with an electric chainsaw. I’m not only fine with that, I’m relieved … I worried they’d get hurt back there, and anyway had no workable plan for getting rid of the branches and limbs they’d have cut down.

Those dark clumps you see in the trees? That’s mistletoe, a tree-killing parasite. Most of those branches will come down on their own, sooner or later. There’s a 50-foot wide strip of brush between the backside of our fence and the road to Mount Lemmon. We’ve had the strip cleared before, but as with all things the price keeps going up and up and we can no longer afford such niceties … and it’s not like our neighbors clear the wild brush on the backside of their lots either. It’s home to coyotes, javelina, rattlesnakes and pack rats. Birds still nest in those mesquites. I’m happy to wait for them to come down on their own.

There once was a third big mesquite back there, closer to the highway. A drunk mowed it down 15 or 16 years ago. I heard the thump from inside the house and knew right away what had happened. I went out back and found the guy standing by his totaled van, and stayed with him until help came. I was going to call the county the next day about having the dead tree  removed from the side of the road, but it was gone before I could … someone with a truck must have stopped and taken all the wood.

It’s Friday now, just before noon. Greg and Quentin left a little while ago. I think we’ll see them next month, along with our daughter-in-law Beth, when they come down for the 4th of July.

We took Mister B to the vet yesterday. He’s been listless the last couple of days, not his regular self, occasionally hacking as if something’s stuck in his throat. The vet couldn’t find anything obviously wrong. We’re giving him something to soothe his throat, and if he’s still the same on Monday, taking him back to have him tested for Valley Fever. Here he is, relieved to be going home from the pet clinic. 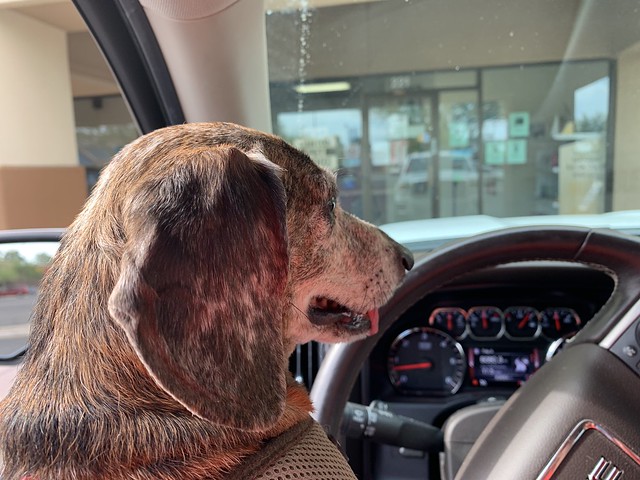 I’m worried about our dog, but more worried about Donna, who for the past two days has had a sore throat. With the pandemic it’s hard not to immediately assume the worst (I always do, don’t you?), but she doesn’t have a fever, so there’s that. Our doctor has an opening and will see her this afternoon.

This week has seen our quarantine bubble well and truly popped. In addition to Greg and Quentin, Polly’s boyfriend Sebastian was over yesterday … if it turns out Donna has the virus we’ve got a load of people to notify, all of whom will have to notify the people they see. Well, you know what they say: contact tracing starts at home. Uh, they say that, don’t they?