Drinkers with a Satanic Cult Problem? 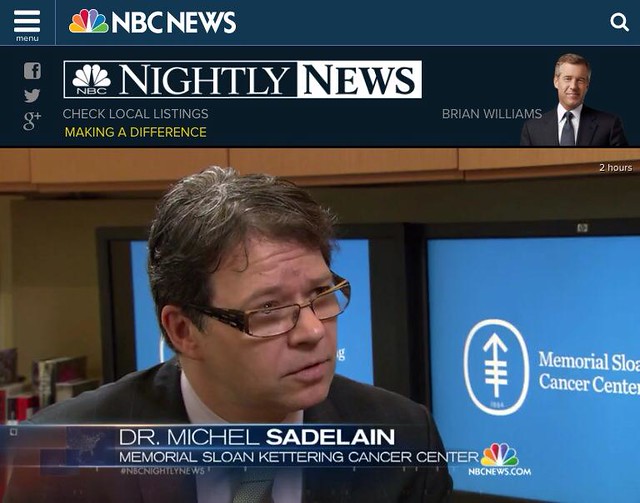 We were watching the news last night when Pick’n’Flick said, “Hey, look at that!” I only caught a glimpse of it before it was gone, but happily the video segment was already up on NBC’s website and I was able to get this screen grab off my iPad.

Naturally I turned to Google to find out more about that mysterious, yet oddly familiar symbol. The first link I got after typing in “Sloan-Kettering Cancer Center symbol” led me to this very odd bit of information: 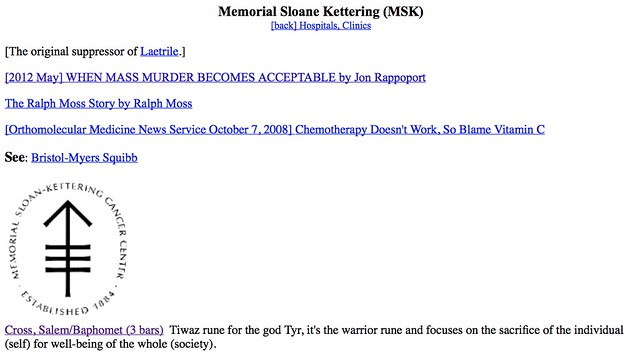 Screen grab from whale.to (not linked)

You can probably tell from the verbiage at the top that the site this screen grab came from associates Sloan-Kettering Cancer Center with demonology. I cropped out the really crazy stuff, where they accuse S-K cancer researchers of killing millions in order to make money for big pharma while suppressing the truth about apricot pits, which are not only free and abundant but are a totally proven cure for cancer, just ask Steve McQueen. I’m not linking to the site where this came from, and I’ll explain why down below.*

Regardless of all that, is there anything to this Salem/Baphomet stuff? I don’t know what you think of when you read the words Salem and Baphomet, but I think of witch trials and one of Satan’s better-known demons. Here’s what I found out about the ”Baphomet Cross“: 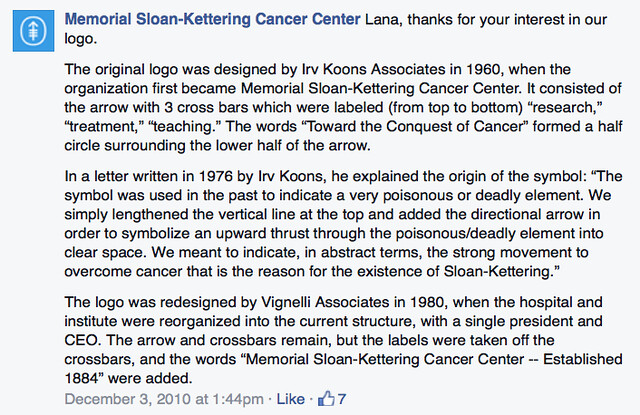 Remember the ginned-up scare stories about how the Palmolive “man in the moon” logo was some sort of satanic symbol? It’s pretty clear to me that the assholes trying to associate a cancer treatment center with demonology are up to the same tricks. No doubt they’ll find true believers. I hope they all choke on apricot pits … but not before they realize the apricot cure is bullshit and didn’t really cure their cancer.

In other words, I believe the Memorial Sloan-Kettering spokesperson’s explanation: the symbol has nothing to do with Baphomet or Salem or anything shady at all. It’s an upward-pointing arrow, punching through the poison of cancer into the clear space above. If there’s a devil in this story, it’s cancer itself.**

But what about Sloan-Kettering’s symbol being the same one Hash House Harriers use to mark true trail? Is there a connection? Which came first? And is there any satanic connection with the hash version of the symbol?

These are probably unanswerable questions, but I’ll put links to this post on hash email lists and forums and see if anyone knows. Sloan-Kettering says they’ve been using their arrow symbol since 1960. I’m pretty sure Mother didn’t use this symbol on trail back in the day, or even if they do so now. And there weren’t any other hash kennels until 1962, when Singapore HHH was founded. Harrier clubs predate hashing, though, with some clubs going back to the mid-1800s. It’s possible the symbol was in use on harrier club trails before Sloan-Kettering began using it, but proof of that is lost in history.

My main question to the hashing world is this: never mind Sloan-Kettering, which hasher or kennel first started using an arrow with three crossbars to mark true trail, and when? Was it intentionally copied from the Sloan-Kettering symbol, or is it just a coincidence it looks the same? And here’s the most important question of all: is our symbol, unlike the one used by Sloan-Kettering, based on demonology? Hashers need to know!

*I posted the NBC News screen grab to Facebook last night. Ten minutes later I posted the second screen grab … the one from the looney tunes site accusing Sloan-Kettering of being in league with the devil … and made the mistake of including the whale.to link so that people could read the whole thing if they wanted. Apparently whale.to is a forbidden site. I was summarily ejected from Facebook and my account shut down for about 30 minutes. When I was finally able to log in again, the link was nowhere to be seen, and I had to read and clear a stern message from Facebook about complying with their terms of service. I think I’m on probation now.

So here’s the link, spelled out: whale.to/cancer/memorial_sloane_kettering.html. You can copy it into your browser address window if you really want to read the craziness there. I personally recommend you stay the hell away from whale.to. Once bitten, twice shy.

**Got word last night that a Tucson hasher’s cancer is no longer being treated, and that he’s been placed in hospice for his last remaining days. He hashed with the men-only traditional kennel I founded several years ago, as well as the main mixed Tucson hash. Hasn’t been seen for years, and apparently only a few hashers even knew he was sick. I didn’t know until last night. So if I sound a little defensive about shit-stirrers who want to bash cancer researchers and doctors, perhaps you’ll understand.