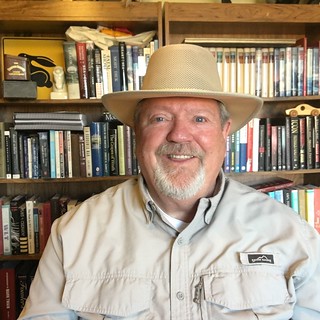 My old cloth sun hat, the one I wear while volunteering at the air museum, has given up the ghost. After multiple washings to remove sweat stains, the brim no longer holds its shape: one side flops down to my eyebrow while the other juts up, giving me the appearance of a deranged Aussie.

I decided to visit a proper hat store and get one that’ll not only hold its shape but resist sweat stains, and this is the one I picked. Those of us who work outdoors at the museum are encouraged to wear brimmed hats for sun protection, but there the guidance stops. Guidance or no, outdoor docents settled on white hats. I’ll break ground with a tan hat, but at least I’ll be able to say, if challenged, that it matches our uniform pants.

I wore bling on the cloth hat: miniature USAF pilot wings, a little gold F-15, my International Society of Air Safety Investigators pin, and the like, but with the new hat I’m going clean.

I’m not wearing it tomorrow because it doesn’t have a chin strap. I can’t bear the thought of seventy bucks’ worth of hat blowing off and rolling around in the dirt. I should’ve asked the haberdasher if he had accessory straps but didn’t think of it until this morning, so I looked online. Turns out they’re called stampede straps, and yes, Amazon sells ’em. By next week, the hat’ll have a strap and I’ll be in business. 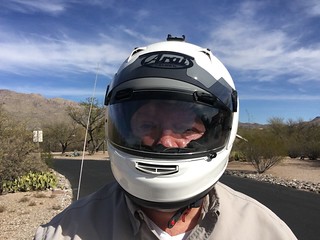 In hat-related news, I bought a replacement visor for my motorcycle helmet, one with a secondary dark visor that flips up and down. Riding from Beatty to Yuma a couple of weeks ago, I was looking into the sun all day. The visor I had at the time was clear, so I wore sunglasses inside the helmet. The trouble with that was they felt like they were digging into my nose. When it comes to glasses I’m like the princess with the pea; they can be light as a feather but after a while I feel the weight pressing down.

My son rode with us that day and he had one of these double visors on his Arai. Now that I have one too I can say it’s a great improvement. All motorcycle helmets should come with them. I wonder how many riders and drivers have crashed due to temporary sun blindness. It was a huge issue flying fighters, especially in a visual engagement, and I often wished for three hands: one for the throttles, one for the stick, and one to put between my eyes and the sun. 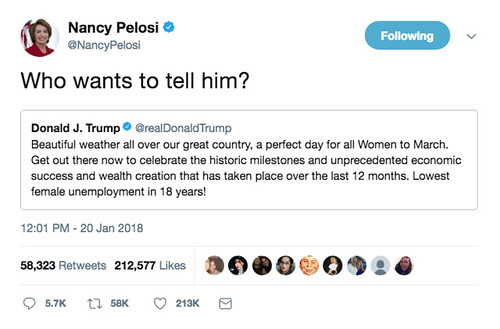 I could rant and rave about Trump and his first year in office, but plenty of intelligent and insightful people already are and I have nothing new to contribute. Just this: he’s not going to be impeached. Nor will he be brought up on criminal charges by Mueller; nor is it likely he’ll stroke out and become incapacitated. No Republican in the House or Senate will take action against him, and since they’re in the majority, no Democrat can. In addition to having a majority in both houses of Congress, he has the Supreme Court in his pocket. He literally can “stand in the middle of 5th Avenue and shoot somebody” and get away with it. It’s tribalism run amok, which explains why evangelicals stick with him through scandal after scandal, and will still support him even if the Russian hooker videotapes come out.

The one shot we have is to vote that tribe out and put ours back in charge. Our tribe is larger. We can flip Congress from red to blue in 2018, then vote in a Democratic president in 2020. Until then it’s survive and resist. Tell you what, if we don’t vote in 2018 or 2020, then fuck us, we deserve whatever we get.