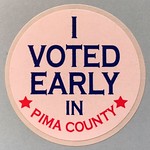 For me, voting was a slam dunk—with the exception of two ballot items, Pima County Treasurer and Arizona Proposition 205.

The incumbent county treasurer, a Republican, is running unopposed. After the impeachment of President Bill Clinton, led by a cabal of serial philanderers, I vowed never to vote for another Republican. I meant it and have kept my promise. I looked online for possible write-in candidates and didn’t find any, so after considerable thought I wrote in the name of my friend Ed, a retired Tucson businessman and well-known community figure.

Now you may ask yourself, if he’s a retired businessman, wouldn’t he be a Republican? Yes he would be, but he’s not running for office as one, and moreover I know his heart’s in the right place. He’s a great supporter of local charities, and his views on immigration are as progressive as my own. Rush Limbaugh would call him a phony Republican. My vow applies to bona fide Republicans, not phony ones.

Arizona Prop. 205, if passed, will legalize recreational marijuana. Businesses selling marijuana would be licensed and regulated. Sales would be taxed at 15%, with revenues going to schools and health programs. I believe the proposition is modeled on the one passed by Colorado voters a couple of years ago.

I don’t like it. I think alcohol is an insanely destructive scourge. It destroys individuals and families. It’s a huge burden on taxpayers, law enforcement, and society overall. How is legalized marijuana not going to be more of the same? And that bit about the money going to schools and health: what a crock. As with state lotteries, the promise is an empty one. Sure, some of the new tax revenue will go where they say it’s going to go, but since lawmakers look on it as “windfall” money, they’ll simultaneously pinch off regular budget allocations, and school and health funding will remain the same overall or even decline.

I don’t like alcoholics and I don’t like stoners, and my instinctive reaction to Prop. 205 was “no way.” But the war on drugs is doing more harm than good, and in the end I had to come down in opposition to laws restricting individual freedom. After serious self-examination, I voted yes on Prop. 205. Let the stoners sift themselves out of productive society; it’s none of my business, and there aren’t enough jobs for everyone anyway.

Donna went with her instincts and voted no, as will most Arizona voters. Legalized marijuana won’t come to Arizona anytime soon, but other states are embracing it and eventually it’ll happen here too.

In unrelated news, I put a new battery in the Goldwing and now it’s ready for a Death Valley ride in November. New footpeg rubber inserts too … the motorcycle looks brand new with them.

A week ago I went to the wild bird store to buy seed. I asked about our bat problem—they drink up all the hummingbird nectar—and the lady said it won’t be a problem much longer because they fly south to Mexico for the winter. I did not know that about bats, probably because I’ve never seen one fly in a straight line for more than a second. Apparently they do, though. But then she said there was a new kind of hummingbird feeder bats can’t get their tongues into, and I bought one. I felt bad about spending money on something without talking it over with Donna first, but then I told myself I have a birthday coming up and was allowed to buy myself a present.

So I brought it home and left it on the kitchen counter. Donna came home an hour later, saw it sitting there, and thought I’d unwrapped the birthday present she bought me last week: the exact same feeder. It must be true, what they say about couples who’ve been married forever: they know one another too well! I took the feeder back to the store and will wait for my birthday to put out the one Donna’s giving me.

In the meantime I’ve hung an old feeder—very much not bat-proof—where the new one’s going to go, just outside the home office window where I can keep an eye on it when I’m blogging. The hummers have found it, and so have the lesser goldfinches, and they’re already fighting over it. 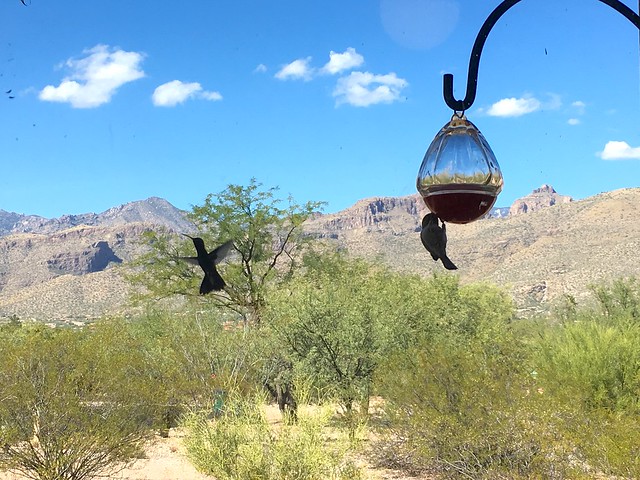 That’s one of the finches on the feeder, with a hummingbird having a snit nearby. They do the same thing to me, the hummers, when I take the feeders down to refill them.

I sent a tube of spit to one of those DNA analysis companies, and my results are in. They sent the report via email; it’s waiting in the inbox. Since that too was a birthday present to myself, I won’t read the report until the 31st, my actual birthday. Pretty sure I’ll turn out to be what everyone has always told me I am, mostly English with some German blood, but won’t it be fun if there’s a surprise in the report? My four sisters are anxiously awaiting the information, which I’ll share soon.

Thirteen days to go, fellow voters. Tell you what, vote by mail if you still can. It beats hell out of standing in line.

2 thoughts on “My Not-So-Secret Ballot”