With Harper Lee’s re-emergence on the literary scene, people are once again talking about her famous novel To Kill a Mockingbird. Predictably, some of those people think the book, and at least one high school production of a play based on the book, should be suppressed.

Here’s some news about a failed effort to ban disturbing posters of clowns. While I’m totally opposed to banning books, I fully endorse the banning of clowns.

Administrators force a public school library to pull copies of a graphic novel from its shelves after a single verbal complaint from a parent, short-circuiting their own formal review process.

Public library in Texas stands up to conservative parents who wanted two LGBT-themed books removed from its children’s collection.

I didn’t know that Ray Bradbury’s publisher, Ballentine Books, for years only sold a bowdlerized version of Fahrenheit 451. Apparantly Bradbury didn’t know either, and was furious when he found out.

Disturbing if true: “In just four years, the percentage of Americans who believe there are any books that should be banned has increased by more than half: 28% believe this to be the case today, vs. 18% in 2011.”

The Fivethirtyeight blog questions the statistical validity of the American Library Association’s list of most-banned books, complaining that the ALA won’t share its data. Here is ALA’s response.

Trigger warnings: Judy Blume laments that many on the left are now pushing censorship with the same zeal as the 1980s religious right.

Columbia University agrees with Ms Blume: it will combat censorship by not requiring professors to issue trigger warnings about class materials. It did, however, remove Ovid’s Metamorphoses from one class reading list, a book that triggered sensitive fee-fees in some students. 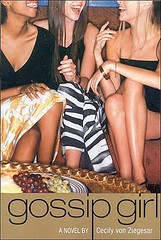 Generally, when I read such books, I find them to be honest, well written, and moral. Many are written with young adult audiences in mind and are meant to teach critical thinking. They abound with valuable life lessons and are just the sort of books I wish I’d have read back in junior high. I usually come away scratching my head, wondering if these parents and religious groups ever read past the offending passage.

Alas, this is not the case with Gossip Girl. I read this slim volume, the first in a series of Gossip Girl books aimed at young adult readers, in six hours. Finishing it, I felt as if I’d emerged from a long wait in a dentist’s office with nothing to read but back issues of People and Teen Beat. Shallow? If you take out celebrity and designer label name-dropping, along with mentions of glamorous vacation destinations and tony Manhattan addresses, you’ll be left with a pamphlet.

Who reads this stuff? If J.K. Rowling’s heroes had been Draco Malfoy and his band of bullying shits, she’d still be languishing in obscurity. Yet the Gossip Girl books are quite popular, I understand, mainly with young girls. Are girls really this shallow? Well, obviously someone buys all those celeb lifestyle magazines!