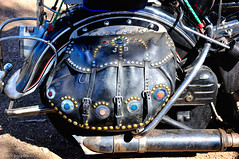 In preparation for my ride to Colorado next month, I made a motorcycle maintenance play date with my friend Ed. That was yesterday, and it was a full day … well, nine to five anyway, a full day for a working man. All I have to say about that is I’m happy I’m retired and no longer have to put in nine to five days!

We replaced the tires and front brake pads. We flushed the brake system and replaced the fluid. We changed the oil and filter. We took off the instrument panel and rewired the hand-held GPS I mount on my right handlebar (the power cord had frayed and no longer worked, and I’d been running it on batteries alone). Sometimes people ask me why I bother with a hand-held GPS. Because it’s an accurate speedometer, mainly, way more so than the one on the Goldwing! Oh, and it has an altimeter, which is nice. No, I don’t use it to navigate … I’m still a map person.

This morning I washed the oily fingerprints off the paintwork and now I’m ready to ride. What, I have to wait a whole month before I can leave for Colorado?

Well, it’s always good to be ahead of the game. Here’s a photo:

If Donna and I ever graduate to a three-car garage, I’m getting a motorcycle maintenance stand like Ed’s, hooked up to a compressed air system. It’s so great bringing the work up to you, as opposed to crouching or kneeling to bring yourself down to the work. Compressed air and air tools? A gift from the gods. Want.

As long as we’re talking about vehicles, the next set of photos show an interesting creation made from two of my favorite things: motorcycles and airplanes. It’s a Bonneville Salt Flats land speed record car constructed of a WWII fighter wing tank and a 50cc Garelli two-stroke motorcycle engine.

Somehow the Pima Air & Space Museum acquired this little speedster. I took these photos Saturday in a back room at the museum; it looked to me like all it needs is a bit of cleaning and it’ll be ready to move into one of the display hangars.

Here’s what little I’ve been able to learn about it:

The builder, Alan Richards, named it Claustrophobia. It rode on bicycle wheels enclosed in a modified 100-gallon wing tank body. The wheelbase is 32 inches, 18 inches side to side. The engine ran on methanol and produced 10 hp. Richards was shooting for 100 mph, but Claustrophobia’s best clocked time was 56 mph (it did hit 70 mph before it got to the timed portion of the run). The driver, Warren Roll (130 pounds), got inside through a top hatch. Once inside he crouched on his knees with his head in the front bubble windshield. Total weight including Mr. Roll was 330 pounds. It ran at least two seasons at Bonneville, in 1963 and again in 1969 (you’ll see a 1969 Bonneville sticker on it in one of the photos I took at the museum Saturday).

The top two photos are mine from Saturday. If you click on them you can see the originals on Flickr and view them full size to see detail. The historic photos are from the 1963 and 1969 record attempts. In 1963 Claustrophobia was unpainted, and the original spoked bicycle wheels are visible. In 1969 it sported the black & red paint scheme it wears today, and the wheels were covered with a thin aluminum skin.

Glad I ride a Goldwing … plenty of room to stretch out, and I can go way faster than 56 mph!