JWs at the Door

Someone rang our doorbell this morning. We heard our grandson answer it, but since he didn’t call for us we figured it was nothing and kept working in the office. When Quentin walked by the office a few minutes later I asked him who came by. “Some guy who wanted you to come to a meeting,” he said. One of my neighbors is a member of the Tanque Verde Democrats, and he sometimes invites me to meetings, so I figured it was him. But then Quentin said the guy left an invitation, and handed it to me. 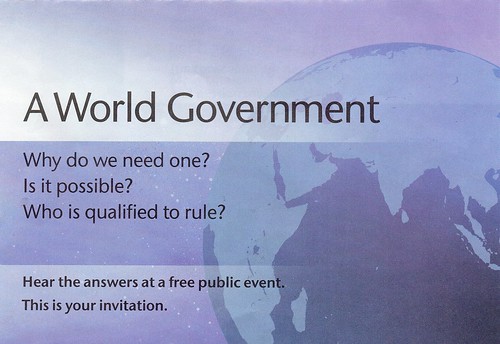 Definitely not the Tanque Verde Democrats, then. More like the Communist Party USA. Just kidding … of course I knew right away the answer to the third question would turn out to be “Jesus.” I looked through the flyer to see who’s putting on this “free public event,” but it didn’t say. And then, in very small print at the very bottom of the back page: “© 2014 Watch Tower Bible and Tract Society.” Jehovah’s Witnesses. Who else?

I’m surprised they didn’t stay to talk, as they usually do. Maybe they’re not supposed to engage children, I don’t know. In any case they just left the flyer, which doesn’t resemble any JW tract I’ve seen before. They must have a new PR department.

Live and let live. Regular readers know I’m an atheist, but not the proselytizing sort. I do my best to live the Golden Rule and wish others would do the same. As long as people don’t try to force me to live by their religious rules I’m fine. Trouble is, a lot of religious individuals and groups want to do exactly that, most visibly in the areas of birth control and abortion, and they have friends on the Supreme Court.

When I first heard SCOTUS had ruled against the Massachusetts law establishing 35-foot buffer zones around abortion clinics, I almost swallowed the First Amendment/free speech rationale they cited in overturning it, but then I learned the SCOTUS ruling affects only abortion clinic buffer zones, not the 100-foot buffer zone around the Supreme Court building, not the buffer zones that have been set up around polling places for as long as I can remember. And Chief Justice Roberts’ 1984-ish language, describing the screaming verbal attacks and attempts at physical intimidation anti-abortion protesters engage in as “counseling,” well, that cinched it. The ruling had nothing to do with free speech. It had everything to do with restricting access to abortions.

SCOTUS is going after abortion with this ruling, and it’s screamingly obvious they’re going to overturn Roe v. Wade as soon as the right case comes before them. The next tell will to be the Hobby Lobby ruling. If they decide corporations can cite religious beliefs to deny medical contraceptive coverage to employees, that’ll be the signal they’re coming after birth control as well.

Supreme Court appointments are so very very important. Can you imagine the harm another Republican president might do? One more Scalia, one more Roberts, and we’re stuck with a regressive religious right court for a generation, Bill of Rights minority protections be damned.