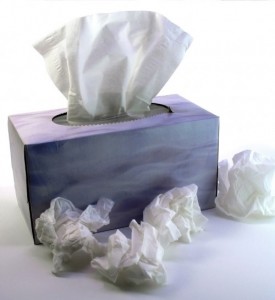 Woke up two days ago somehow aware of my nasal cavity.  My goodness, the inside of my head is full of strangely-shaped passages and sinuses, I thought.  That awareness was a sign; sure enough, as the day progressed, the recesses and folds inside my head became hot, then itchy, then sore.

Not a week ago I was thinking how lucky I’ve been to be cold-free the last two years. As they used to say, naming calls. That’s a fancier way of saying that if you think of the devil, he’s going to come knocking before long. But how do you prevent thoughts? You can’t. Thinking about not having had a cold in a long time, like I did last week? That was probably my body recognizing the first subtle symptoms of a summer cold.

So … blow, sniffle, blow, sniffle.  The worst is yet to come, but I’ll get through it.  I hope Donna and Polly don’t catch it from me, but that’s probably inevitable.

This summer’s monsoon is living up to its name.  We’ve had a lot of rain, mostly in the form of sudden thunderstorms.  The pool is full to the brim, and that’s a lot of water.  We finally can turn the sprinkler system off, at least for a few days, and maybe save a little money.  Have any of you looked at your water bills lately?  Scary times are coming, if utility bills keep climbing.

Polly was having dinner at Chuy’s with her co-workers last night around 7 when a lightning strike knocked out power to that part of town.  We live several miles north of there and our power outage lasted only a second or two, but the East Tucson neighborhood Polly was in stayed black for several hours.  Chuy’s was packed at the time, and Polly told us the most interesting thing: when the power went out, the restaurant began to fill up with thick greasy smoke from the grills and deep fryers.  The kitchen exhaust fans had of course quit working, and the smoke spread horizontally.  Of course the computers went down too, so the staff circulated around the tables in the smoke and darkness, asking customers to guesstimate their bills and leave cash on the tables.

I took a bag of garbage out during the storm and couldn’t help noticing how hot and still it felt outside.  A friend who lives in the neighborhood that lost power told me today it was a miserable few hours, her house getting hotter and hotter as the evening progressed.  We like to say that Tucson, as hot as it gets, at least cools off at night, unlike Phoenix … but last night we might as well have been in Phoenix.

The last reminder of the years we lived with macaws and parrots is a medium-sized parrot cage on our back patio.  We sold it to a friend who has African Greys, and he’s driving up from Sierra Vista to fetch it tomorrow.  Another friend is coming over tomorrow to borrow my little utility trailer, and some furniture guys are delivering a patio chaise we had refurbished.  And people wonder how colds spread!