Damn, it’s hot. I feel the need to be outdoors, doing outside things and working the old body … but damn, it’s hot. And I hear it’s hot everywhere, so I can’t claim any special exemption for living in Arizona.  Still, I fished a tarantula out of the pool yesterday, and that’s an Arizona thing. He (or she) was very much alive, floating on its back and moving its legs; as soon as I scooped it up with the pool net it righted itself and perched on the edge until I carried it outside the fence and set it down on the ground.  As soon as the net touched the dirt it leapt off and scooted away.  Apparently tarantulas have good depth perception, even when they’re half drowned.  No harm done, I hope.  Go in peace, scary friend. 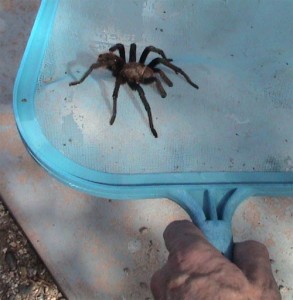 This is a photo I found using Google images, shamelessly borrowed from this site. I use a similar net, but mine’s on the end of a twelve-foot pole, and you can bet I was at the other end!

This is the first tarantula I’ve seen in about six years. They’re all around, of course, I just haven’t noticed any lately. Probably the dogs harried it around the patio until it jumped into the pool to escape them. Schatzi and Maxie chase lizards and ground squirrels into the pool a couple of times a week. It falls to me to fish them out. Sometimes I discover them swimming or clinging to the pool sweep tube, still alive; more often I don’t find them until after they’ve drowned.

Our pool does double duty as a livestock pond. Paper wasps drop by during the day, using surface tension to perch on top of the water as they drink, then flying away to the northwest in the direction of their nest. They never come close to us when we’re in the pool, nor have we ever seen more than one at a time. I believe they suck up extra water to share with their mates back at the nest, and aren’t merely drinking for themselves. The bats come after twilight, making high speed passes a half inch over the water, leaving a wake … they skim the surface with their tongues, scooping up water as they go. I’ve only seen it two or three times, but there’s a night-flying bird who drinks from our pool using a similar technique, scooping up water with its lower beak.

Could coyotes and bobcats leap our fence and drink from the pool as well? Yes, they certainly could, but I don’t think they do, at least not often.  Our dogs would raise hell if they smelled or heard a large animal out back.  Schatzi in particular is hyper-protective of what she perceives to be her property (i.e., the house, the front and back yards, the street we live on), and she runs into the back yard, barking fiercely, whenever she senses an intruder.  If, may the gods forbid, she ever surprises a bobcat or coyote drinking from the pool in the middle of the night, I hope she has the good sense to dart right back inside.

Actually I think that exact scenario played out a couple of years back.  I remember her barking and running out through the doggy door one night, then immediately flying back in, leaping onto my lap and climbing up my chest to wrap herself around my neck.  Donna and I both thought there must have been something scary outside, and for weeks afterward we sealed off the doggy door at night.  The cinderblock fence around our back yard and pool is eight feet high.  Some of our neighbors’ fences are lower, and I hope the local predators are drinking from their pools, not ours.

That’s the news from tarantula land.  Honestly, I wish the little creatures well, but would just as soon not have another close encounter any time soon.