Thursday Is a Venting Day!

Never mind his hurt fee-fees over the mean things Obama said, and the strong possibility he’s only saying this to hurt Rick Perry’s chances … this is Karl Rove himself saying it’s offensive to describe America as a Christian nation. Yes!

For years now the Christian right, specifically the dominionist faction (aka the American Taliban), has been trying to rewrite American history. They want us to believe this is a Christian nation, founded by Christians for Christians. Rewriting history is a necessary prologue to undoing the Establishment Clause of the First Amendment: “Congress shall make no law respecting an establishment of religion.”

Well, okay, they can argue all they want, right? It’s a free country! The trouble is so few politicians or prominent media figures seem willing to call the dominionist interpretation of history what it is: a lie.  I’ve been listening to the Christian nation message for years now.  It almost always goes unchallenged.  It’s as if we’re too genteel, to afraid to offend the good-hearted believers of mom-and-apple-pie America.

Week after week we hear these lies on the Sunday morning talk shows. A panel of Republican politicians and opinion makers (augmented by the occasional Democrat guest) sits silently by while Michele Bachmann or someone like her makes things up about our founding fathers’ beliefs and deliberately distorts the meaning and intent of the First Amendment. No one speaks up. The host never intervenes.

Even on NPR, where they sometimes try to counter the drumbeat of lies, they do it in such a way as to give the lie equal billing with the truth. When NPR hosts invite a scientifically-qualified guest to talk about global warming or evolution, they always give equal time to denialists and creationists. The same thing happens when they address the Christian nation falsehood … they’ll have one guest saying it’s a lie and another guest saying it’s true. They make it a 50/50 proposition, leaving it up to the listener to decide between two apparently-equal beliefs.

What prominent public figure is willing to stand up for the objective, historical truth? Where are the opinion makers, the influential people with access to the media, who are willing to call lies lies? Hooray for you, Karl Rove, for saying what must be said. Actually, it’s good it’s you saying it. Had it been Barney Frank or Keith Olbermann, it would be dismissed. But you said it, and maybe people will pay attention. Describing the USA as a Christian nation is offensive. A lot of us are not Christian, and this is our country too. The First Amendment was written to protect us all.

Speaking of lies, I swear, these birther assholes will never go away.  Never.  “The reason I no longer obey the Commander-in-Chief is not because he’s Black, but because he has no credible proof that he is an American. . . . It’s simple.  Arrest B. Obama or arrest me.”

The Army had one of these jerks a little while back; now the Air Force has one.  Correction: had.  They’re discharging him.  The beauty part is the dude’s name is Moran.  Really.  Moran. 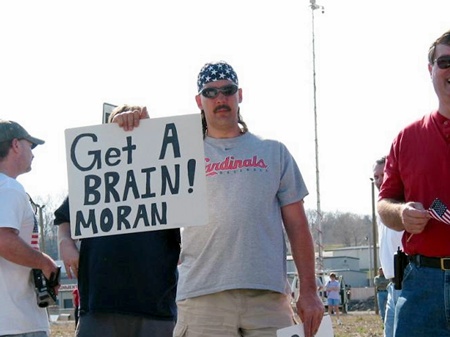 I’m still in touch with an old friend from grad school.  Back in the day we were political activists (she somewhat more than me).  She’s writing now, and one of her projects is a story about a former Weather Underground member living incognito in a retirement community.  Some (edited) excerpts from her latest letter to me:

Writing from both ends towards the center is a strange way to approach a story.  I’m almost ready to write the big confrontation scene where ________ tells ________ she knows who she is and they settle in for a long talk.  But it’s going to be gut-wrenching.  I always figured I’d just whip off a quick little story of what’s happened to the activists nearly fifty years later, but I keep getting drawn back into it, deeper and deeper.  When I talk to my black friends, or when I look around at the country today, I realize the extent to which things have not gotten better.  We all thought the Civil Rights Movement and the Peace Movement would make things better, especially when Nixon declared victory and brought our troops home.  But things aren’t better.  The capitalists control more than ever, Alabama has finally passed an immigration law so awful that even the crazy Christian right is upset, and the lies just keep getting bigger and bigger.  I have now forbidden ________ from listening to any of the radio talk shows, not because they are filled with lies (which most of them are) but because they’re so hysterical.  I can always tell when he’s been listening to them, because he gets hysterical and cynical.  I know that the Buddhist way is to recognize pain but not to suffer from it, but how can one not suffer the injustice that surrounds us?  Yesterday, I finally broke down, after all these years, and ordered the poster showing Tommie Smith and John Carlos giving the Black Power salute at the 1968 Olympics.  I nearly burst into tears the first time I saw it.  I think it’s one of the most eloquent moments in history, and the Olympic Committee stripping them of their medals is still a blot on the history of the games themselves.  We can have an Olympics run by the Nazis, but two guys can’t make a single, silent statement about the struggle in their own country?  How fucked up is that?

Word, sister.  We need to light the fire again.