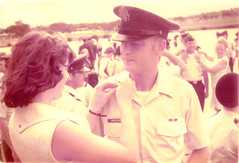 The War to End All Wars ended on the eleventh hour of the eleventh day of the eleventh month of 1918. Americans called it Armistice Day and celebrated it as a national holiday until 1954, when, under President Eisenhower, it became Veterans Day, a day to honor all military members who served in war or peace, dead or alive. On this day I think of, and thank, those who gave their lives in service to the country, and am always nonplussed when people offer thanks to living vets, like me.

But there we are. I served for 24 years, 1973 to 1997. I retired 23 years ago, and next July will have been out of the service as long as I was in. Of course that doesn’t account for my pre-military life, during most of which I was a military brat, the son of a serving officer. Maybe that explains why I automatically assume friends, associates, and new acquaintances also served, and why I’m always surprised to learn they didn’t. Apart from the friends I served with, hardly anyone I’ve met since ever did.

The inset photo is from early 1974, graduation day at USAF Officer Training School, Lackland AFB, Texas. That’s Donna, pinning 2nd lieutenant bars to my collar. We were so young, so smart, so pretty! Donna didn’t wear the uniform, but like all military spouses she served alongside me and is as much a veteran as I am, so it’s her day too.

In the on-going presidential election fallout, I’ve been reading about Trump supporters questioning the validity of military absentee ballots cast for Biden. I’ll just note that when I graduated from OTS in 1974, anger over the Vietnam War was at its peak, and Nixon, then the president, would be forced to resign a few months later. I’ll hazard a guess that most military members serving then were 1) happy to see the end of the war, and 2) delighted to see Nixon go. The military is not some monolithic right-leaning voting bloc, not by any means. I bet a lot of men and women serving today are anxious to see the last of Trump.

A friend, the publisher of a popular military aviation weblog, asked if I’d write a post on why dictators don’t trust their own air forces. My first thought was that dictators don’t trust any branch of the military because that’s where the next dictator comes from, though traditionally the rebel general who takes control of the presidential palace and state media does it with tanks and ground forces, not air power.

I told him I knew the 2016 coup attempt in Turkey was bullshit when airborne Turkish F-16s allegedly under control of rebel air force leaders didn’t intercept and shoot down Turkey’s presidential plane, which was returning Erdogan from a holiday visit to southwest Turkey. It would have been an easy thing to do; that they didn’t do it told me the whole thing was a setup engineered by Erdogan himself. Of course he conducted a massive post-coup purge of the military anyway; that was probably his goal all along.

The more I think about Erdogan’s phony coup and subsequent military purge, the more I wonder what Trump hopes to achieve by firing high-ranking Department of Defense and Pentagon civilians and replacing them with loyalists. But then I think of how slow-moving and institutionally resistant to change the military is, and doubt Trump can pull anything off in the short time he still has in office. And then I remember he still has the nuclear football and OMG OMG OMG.

Well. On to happier and less unstable times. Happy Veterans Day to all my military brothers and sisters!