Liberals with Guns (Say What?)

It’s a disturbing thought, but 2020 makes me think of guns. Well, duh (see fig. 1). Except I won’t be around in 3030, so 2020 will have to do. I hope the new year won’t be too shooty, but my impression is that every year lately is more full of shootings than the one before.

Speaking of guns and ammo, I’m letting my Arizona concealed carry permit lapse. The state wants $43 for a two-year renewal, which seems reasonable until you read the fine print: you can only pay with a certified or cashier’s check. You can’t use your credit or debit card, as you can for auto registration. No. I’m not going to jump through a 1950s-style payment hoop to please an obscure state agency that refuses to move into the 21st century. Anyway, thanks to the NRA anyone can now carry concealed firearms in Arizona, with or without a permit, so the only reason to renew is to legally carry in states that have reciprocity agreements with Arizona. Since I no longer pack on trips to neighboring states, it’s not an issue with me. And why do I no longer pack? Because, c’mon, the only person likely to get shot with my gun is me.

My Arizona driver’s license expires on my birthday in October. Coincidentally, October 2020 is when all Americans will need Real ID-compliant licenses to travel by air. I expect long lines at the MVD as October approaches, so I’ll try to get a new Real ID license sometime within the next couple of months … that is if I’m allowed to renew early. After all, if the Concealed Carry Unit of the Arizona Department of Public Safety can demand I wait in line at Mister Potter’s bank in Bedford Falls to get a cashier’s check, the Motor Vehicle Division of the Arizona Department of Transportation might very well demand I wait until my birthday to renew my driver’s license.

It seemed like everyone was posting collages of their favorite 2019 social media photos yesterday. I thought Instagram and Facebook had tools for making them, but no. You need a third party app. I downloaded one that promised to make a nine-photo collage of my most liked Instagram photos from 2019. Well, it did, but the collage came with the app’s name and link stamped all over it, removable only if I forked over $2.95. To boot, the photos my Instagram followers liked most were not my most liked. So I made a collage with the photo program on my iMac, making sure it included the high points of the year I wish my Instagram followers had favorited. 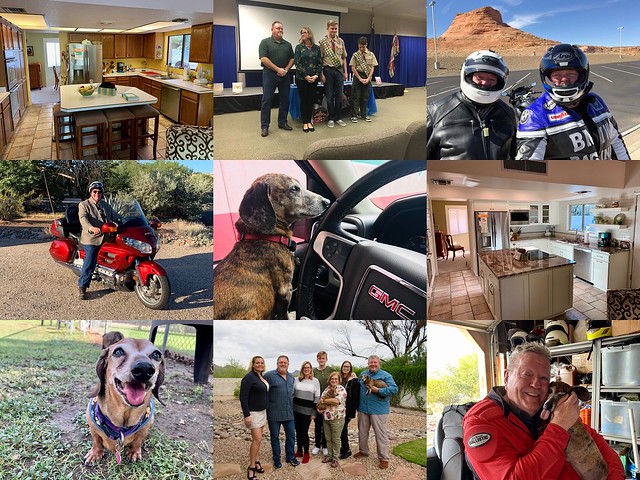 I stay up to observe the new year, if only to comfort the dogs when it gets noisy. Maxie had already gone to bed with Donna last night, but Mister B was by my side. Just before midnight I gently laid my hand on his back, but then the time came and nothing happened. No fireworks, no gunfire. Until about three minutes after midnight, that is. BOOM BOOM BOOM! I don’t know what the neighbors were setting off, but it sounded like the SWAT team was using a battering ram on our back door. Mister B’s head shot up and he flew off the couch, barking his head off. So much for comforting the dogs! Why the delay? Who knows? Maybe the neighbor’s matches were wet. Hey, at least they didn’t get out their pistols and assault rifles and start firing them into the air, a New Year’s Eve tradition I didn’t fully appreciate until we moved to Tucson.

Mister B is avoiding me this morning. Not because of last night, but because he knows it’s cold outside, just a few degrees above freezing. I know it too, so we’ve agreed to postpone our walk.

My Facebook news feed is flooded with ads for doggie ramps, no doubt because of all the dachshund photos I post. Actually, I’m in the market for a ramp. I made a carpet-covered plank ramp years ago for our first dachshund, Schatzi, so she could get on and off the couch without hurting her back; Maxie and Mister B use it today (Maxie always, Mister B reluctantly but he’s slowly coming around). It would be nice to have a taller ramp at the foot of our bed, though. They make them, but we don’t want to spend the money just yet. For now, we lift the pups on and off the bed.

On-on to 2020, dear friends, and another decade of blogging at Paul’s Thing!