Flying Booger and Wankers Aweigh represented the Baja Arizona Knuckledraggers Hash House Harriers Riding Club at the annual Distinguished Gentleman’s Ride in Tucson last Sunday. The DGR is an international charity event established to raise money for prostate cancer research and men’s mental health, with organized rides in hundreds of cities around the world (678 rides this year alone, with over $5.5 million raised). The Tucson event, as it has been for the past three years, was exceptionally well organized and attended, with over 100 riders, many on classic and vintage motorcycles, almost all decked out in their dapper best. Yours truly and Wankers included!

Wankers and I don’t have classic rides, but we did our best in the dapper duds department, as you can see from the above photos. We were joined by a mutual non-Knuckledragger friend, Just Kirk, whom you can see in the photo with Wankers. And before I go any further, let me remind you that you can see full-size photos on Flickr by clicking on the small images in this post.

The organizers of the Tucson DGR, as they have in the past, arranged for a local motorcycle escort service, the Southwest Rangers, to ride with us and clear the route, which amounted to blocking cross traffic at all the intersections we had to cross in and around Tucson. They did it by stationing escorts to block intersections until all 100+ motorcycles had gone through, with other escorts leapfrogging ahead to block the next intersection, sirens wailing and lights flashing. On a 70-mile ride through and around Tucson, we only had to put our feet down twice, once when we pulled into the beer check mid-point refreshment stop at Brandi Fenton Park, and again when we got to the on-in end, the Barrio Brewery in the historic 17th Street warehouse district.

This short video shows a portion of the ride through downtown, not far from the start. You can see some famous Tucson landmarks if you look closely, and also see our escort riders leapfrogging ahead to clear intersections.

The bad part about not having to stop for red lights is that when you ride home by yourself after the event you’re still in the mindframe. Luckily, some cager honked and I came to my senses after almost running the first red light I came to, and made it home safely.

Every year I try to talk other Knuckledraggers and non-affiliated hashers who ride into joining me for this worthy event, so it was a red-letter occasion having another Baja Arizona Knuckledragger turn out this time. Way to go, Wankers Aweigh! Maybe next year we’ll coax a few more out for a fun ride. I was happy to see several Facebook posts from Knuckledraggers in other cities and countries who participated in DGRs in their locations. It’s a great cause, after all … like our own Red Dress Runs (without the sweating).

I’ll leave you with some photos I took at the start. I’m pretty sure the Norton is one of the new ones (they’re making them once again in England … and they ain’t cheap). The BSA thumper’s a classic for sure, as is the 1970s Goldwing. I think the Royal Enfield, like the Norton, is new (they build them in India), but its classic heritage is undeniable, and I bet it’d be fun to own one.

Of course by now my 2001 Goldwing is 18+ years old, well on its way to becoming a classic in its own right, so I didn’t feel shown up by any of the older rides. Love that legacy Goldwing, though … I wish there was a way to strip mine down so it looked like that, but every time I’ve had the plastic bodywork off for maintenance, what’s underneath looked more like the exoskeleton Ripley wore in Alien II. Not dapper at all!

But wait, there’s more. By popular demand, here I am wearing full distinguished gentleman kit (Pick’n’Flick sewed leather patches on my elbows to go with the pipe!): 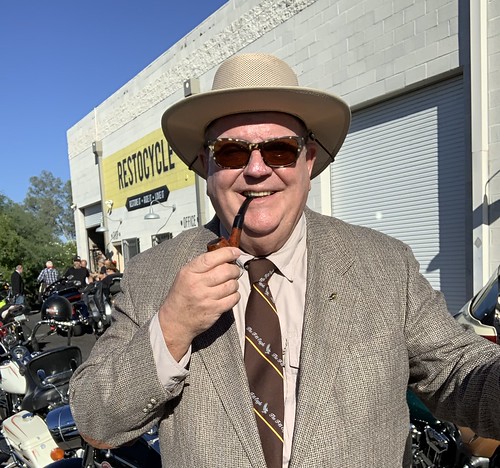 One thought on “Distinguished Knuckledraggers”