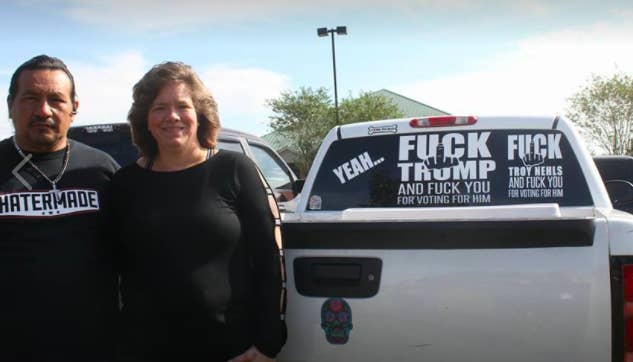 Yes, this lady and those stickers. Judging by my Twitter and Facebook feeds, she’s a free speech hero.

Lady, I’m with you, but I’ve got a problem with saying or displaying obscene words in public. Everyone knows we can’t say certain words on television or the radio (say ’em with me, George Carlin fans: “shit, piss, fuck, cunt, cocksucker, motherfucker, tits”). If someone starts screaming “Fuck!” at the top of his lungs in Safeway or Starbucks, few of us will stand up to protest when the cops haul him away. Everyone understands, or should understand, that certain obscenities are looked upon as “fighting words,” and that such words, depending on when and where they are spoken or displayed, do not fall under 1st Amendment free speech protections.

Are there laws against obscene speech? Surely there are. Are they enforced? Not so much, these days. If the teenagers in line behind you at the local cineplex start saying “cocksucker” and “cunt” over and over, and you’re with your kids, what are you going to do? Call the cops? You know they won’t come. Maybe ask them to stop talking like that? Good luck. Maybe take your kids and leave? We pretty much have to rely on one another to know how to behave in public.

The military is still hard-core on this sort of thing. It has rules, and they’re written down. Here’s a sample, from Davis-Monthan AFB in Tucson:

Obscene/provoking markings. No motor vehicle operated upon the public highways or on DMAFB, shall bear upon any part of such vehicle or its attachments any plate, stickers, card, tag, lettering, markings or pictures of an obscene, vulgar, racist, or sexist nature.

Here’s another, from Naval Base San Diego:

When you’re career military, certain attitudes die hard. Military life is socialistic, far more so than civilians realize, from the care and feeding of troops to housing to military-run exchanges and commissaries, not to mention medical and dental care and ongoing professional education programs. I’ve been a socialist ever since, because the military taught me that it works (so long as slackers don’t get a free ride, that is).

Ditto proper comportment and behavior around other people. You just don’t talk like this. You would never think of putting an obscene sticker on your car. Take another look at that DMAFB rule. “No motor vehicle operated upon the public highways or on DMAFB. …” It applies to USAF members driving their personal vehicles off-base as well. That may seem like a stretch to you, but it reflects the military ethic that service members represent their country whether on- or off-duty.

Tell you what, if I was a cop I’d be tempted to pull that lady over. If she worked for me and I saw her truck with that sticker in my company’s parking lot, she’d be fired.

Just between you and me, fuck Trump and fuck everyone who voted for him. When it comes to my car, though, a simple “RESIST” decal is enough for me.

My other decal says “CURMUDGEON.”