This article, from the American Library Association’s Intellectual Freedom Blog, celebrates public library programs (in San Francisco, New York City, and elsewhere) featuring drag queens in costume reading books to children and sharing make-up and fashion tips. Wow, I don’t know about that. The whole concept sounds shovey-down-the-throaty to me, and I think many library patrons and parents will have a big problem with it.

Silly minorities, books are for and about white people. “The Absolutely True Diary of a Part-Time Indian” is challenged yet again, this time in Minnesota.

An interesting op-ed from the Toronto Sun: Forget ‘Cultural Appropriation’–It’s About Censorship.

The news roundup is deliberately short this time around. I’m leaving room for a review of the book everyone’s talking about these days, Margaret Atwood’s “The Handmaid’s Tale.” 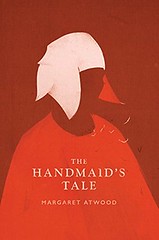 With the recent rightward shift in American government and the elevation of authoritarian Christians to positions of power in the president’s cabinet and personal staff, Margaret Atwood’s dystopian novel “The Handmaid’s Tale” is on many minds today. People are re-reading it; new readers are experiencing it for the first time; hundreds of thousands are watching Hulu’s TV adaptation. When Atwood makes public appearances, the first question she’s asked is “How close are we?”

A recent survey by the National Coalition Against Censorship with the National Council of Teachers of English found that only seven percent of challenges get reported in the local press [and] three studies conducted in recent years—by the Oregon State Library, the Missouri School of Journalism and the Texas ACLU—… found that [only] three to 18 percent of challenges are reported.