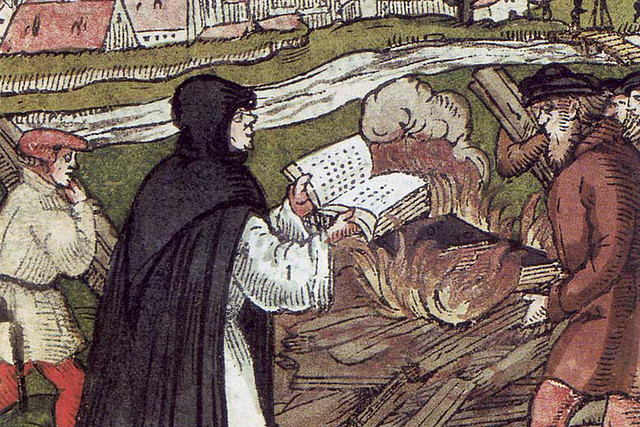 Something tells me I’ll have plenty of material for this column over the next four years. The Cattle Car Caucus is in power, and the Thought Police will be feeling their oats. Let the book burnings begin!

What does “pervasively vulgar” mean? If you’re a school superintendent inclined to cave to parental complaints, it’s a handy label to apply to books and graphic novels you’re removing from school reading lists and libraries.

“Imagine for a moment how the world would be different if Star Trek had never aired on the grounds that the mixed-race, mixed-gender bridge was against ‘natural law,’ so the FCC forbade it.” From a discussion about censorship, comics and graphic novels, and the Comic Book Legal Defense Fund.

Take the Banned Book Quiz! I got a perfect score!

Is it any surprise that in the face of repeated parental challenges to books and teaching materials, school administrators, teachers, and librarians preemptively self-censor?

There is something very disturbing about this report from Kansas City, Missouri, describing how a librarian was arrested and is now facing criminal charges for standing up for a library patron’s free speech rights at a public event.

In the 1930s, the Nazi government had an agent in Hollywood. That agent persuaded Universal Pictures to shelve, at least for a time, three films: “The Road Back,” “All Quiet on the Western Front,” and “Three Comrades.”

I’m a little late to this party: racist internet trolls have been using code words to avoid having their accounts shut down: Google=black person, Skittle=Muslim, Skype-Jew, and so on. Hey, I’ll add one of my own: alt-right=racist! It’s like the secret menu at In-N-Out Burger!

Key sentence from this outraged conservative editorial about PC culture at Cal State University Chico: “True the N-word is nasty and unacceptable, but is Chico State going to ban students from listening to Hip-Hop music that makes prolific use of the word ‘nigger’ in songs?” In other words (stop me if you’ve heard this before): “Waaah, they get to use the N-word and we don’t! Its so unfair!”

Here’s one dad’s brilliant response to the cognitive dissonance created when his son’s teacher demanded a permission slip before allowing him to read Bradbury’s “Fahrenheit 451.”

The Lifeway religious bookstore chain has pulled all books by a Christian author who describes LGBT couples as “our brothers and sisters in Christ.”

One of the many books banned from Tucson Unified School District is Rudolfo Anaya’s classic “Bless Me, Ultima.” The ban, instituted in 2012, is still in effect, and in light of the election of a president who is openly hostile to Mexicans and Mexican-Americans, I’m reposting my earlier review of Anaya’s novel: I read “Bless Me, Ultima” because it is frequently challenged, often banned, sometimes even burned. I read it because it has been banished from Tucson classrooms and school libraries. I read it because I live in a majority Mexican-American community in the southern slice of Arizona that until relatively recently was part of the state of Sonora, Mexico. I read it because many readers have praised it.

Anaya wrote his novel in 1972. Copies were confiscated and burned at a New Mexico school less than a year later. Burning, it turned out, was not to be a one-time aberration: “Bless Me, Ultima” has been burned again and again: the most recent burning was in Norwood, Colorado, in 2005.

My interest in what is sometimes called Chicano pride literature began in January 2012, when Tucson Unified School District administrators cancelled Mexican-American Studies classes in mid-session, pulling novels and textbooks from students’ and teachers’ hands and packing them in boxes labeled “banned books,” a story that resulted in international outrage and made Arizona a laughingstock. “Bless Me, Ultima” was one of TUSD’s targeted books.

Why do non-hispanics hate this novel? The most-often cited reason is that it contains profanity, violence, and sexuality. I can attest to two instances of the English word fuck. Then there’s the Spanish word chingada, which roughly translates to the same thing. Chingada appears so many times that if you were to eliminate all the other words in the novel, you’d still have 20 pages of chingada. Also, the kids in the story frequently address one another as cabrón (asshole). Yes, there is violence … murders among the adult characters, frequent fights among the schoolboys … but I must say that if there’s any sex I missed it.

Other challenges spell out what I consider to be more likely objections: the story is irreverent toward Christianity in general and Catholicism in particular, full of pagan mysticism, and frankly pro-magic (in that Ultima is a practicing medicine woman who uses her arts to stymie and even kill witches). This aspect of the novel, of course, should be neither here nor there in a society that respects the separation of church and state (insert ironic emoticon here).

Arizona State Schools Superintendent Tom Horne dared utter what I believe to be the real reasons behind conservative white antipathy toward “Bless Me, Ultima.” In interviews leading up to the infamous TUSD book bannings he characterized Mexican-American studies and the books used in those classes as “civilizational war” and stated that in his view the histories of Mexican-Americans and Native Americans are not based on “Greco-Roman” knowledge and thus not part of Western civilization. Oh, yes, he really did say that.

So there you have the reasons Anaya’s novel generates so much hate. Now I come to the difficult part, explaining why I didn’t fall in love with the novel. I’ll refer back to the 20 pages of chingada and a host of other Spanish and Indian words sprinkled throughout the narrative: yes, Mexican-Americans living near the US-Mexico border use Spanish and Indian words in everyday speech, but after a while all this multiculturalism becomes a burden.

Antonio keeps telling us Ultima is not a witch, but she has an owl as a familiar and casts counter-spells against three known brujas (witches), killing two of them before she herself is killed … not directly, but by the father of the witches, who kills the owl and thus Ultima. So she’s a witch. C’mon.

Apart from Antonio and Ultima, the other characters are paper cutouts, acting and speaking in predictable ways. It was interesting to see Antonio begin to question the teachings of the church and to embrace the paganism of Ultima and the mysterious golden carp, but that was all the excitement the novel offered, and Antonio’s doubts (like the 20 pages’ worth of chingada) grow tiresome after much repetition.

It’s an okay story. I question how relevant it is to today’s readers, but as a cornerstone of Southwestern and Mexican-American literature it is undoubtedly important. I’m glad I read it, but having read it, I remain more interested in the reasons white people hate it than I am in the novel itself.