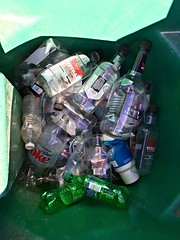 I quit drinking in 2007, nine years ago. I can’t remember the exact day, but it was in March, so I’ll celebrate another anniversary of sobriety with this post.

I’ve made a few bad decisions, but generally I’m a good person who works hard and tries to do the right thing. My one true regret is drinking. For 40 years, from my 20s through my 50s, I was drunk or buzzed nearly every evening. Looking back, I’m amazed I accomplished as much as I did, and wonder how far a clean and sober me might have gone.

For 24 of those 40 years I was in a hard-drinking profession, flying fast jets for the Air Force, but that’s no excuse. I wonder how my old buddies are doing today. Some, I know, are still hard drinkers. Some, like me, have probably quit. I hang around with Hash House Harriers these days, even though I’m no longer a good fit. Younger hashers drink like crazy; the survivors … the ones my age … still drink, but not as much as they used to.

Well, there’s nothing I can do about that now, and hey, better late than never. I’m one of the fortunate ones: Demon Rum turned his back on me the moment I turned my back on him. I haven’t missed his company at all. I sometimes joke I’ll start drinking again on my 80th birthday, but honestly I have no desire to.

Most alcoholics have a far harder time quitting than I did. Many can’t, or won’t. The disabled patients I worked with at the VA hospital were older than me: most of them still drank heavily, often at great cost to themselves, some to the point of losing their families and everything they’d worked for. And then they kept right on drinking.

The inset photo, by the way? Our garbage can after a recent sweep of our resident alcoholic’s room. Believe me, I know what I’m talking about, and am probably more qualified then most to talk about it. Yes, we’re working on it. Every day. 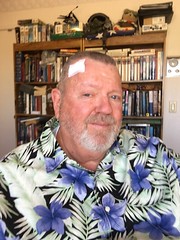 So what else is new? Not the big white bandage on my forehead. The wound from my recent skin cancer surgery is slow to heal and the dermatologist says to keep dressing it daily for another week, then come in for a second followup visit next Tuesday. My barber had to cut around it this morning, since the bandage goes right up against my hairline.

There’s not a lot of green on that shirt, but there is some, so never let it be said I’ve forgotten Saint Patrick’s Day. My family roots are English and German; undoubtedly there’s Irish blood mixed in with that of the English ancestors. Donna’s almost equal parts English, Italian, and Irish. Anyway, we’re all Irish today, right?

Speaking of Saint Patrick (and small towns), a shirtless young man stepped out in front of me on Speedway Boulevard as I drove home from the barbershop this morning. I had to come to a full stop to keep from hitting him, and as soon as I did he stepped out of the way and waved me on. I thought he was mental, but when I got home and checked into Facebook, there was a photo of the same kid being interviewed by Tucson’s finest. The Facebook post says he was drunk, not mental. Well, you can’t drink all day if you don’t start in the morning! 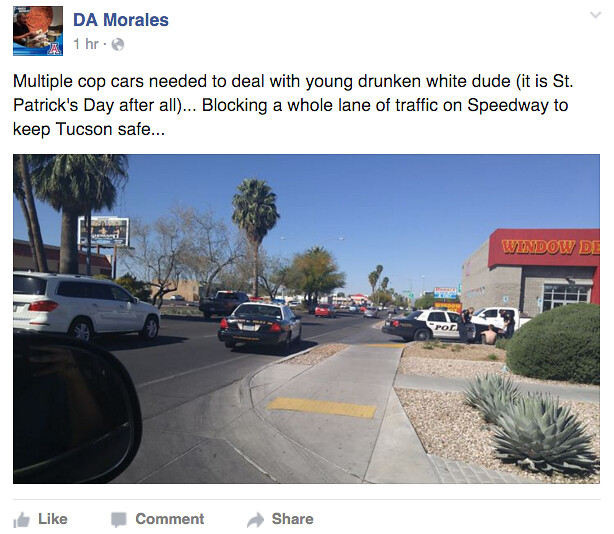 Tomorrow is fork rebuild day at my friend and motorcycle maintenance guru Ed’s garage. Next week our old friend Dick will be here, and of course I’m taking him to the air museum. We were going to drive to Las Vegas for the last weekend in March, but that’s been postponed to the last weekend in April. As before, we plan to tow the motorcycle behind our truck. I’ll go riding with Gregory while Donna visits Beth and the grandkids. The Laughlin River Run is that weekend, so I guess it’s inevitable Greg and I will go mix it up with the Harley crowd. You can bet I’ll be packing.

I have lately avoided saying anything overtly political. But today I’ll break my streak and say this: Hillary, it’s not just vital you win the Democratic nomination and go on to defeat whichever racist grandma-starving no-nothing authoritarian the Republicans put up, it’s an existential necessity. Rest up and get ready for the fight of your life!